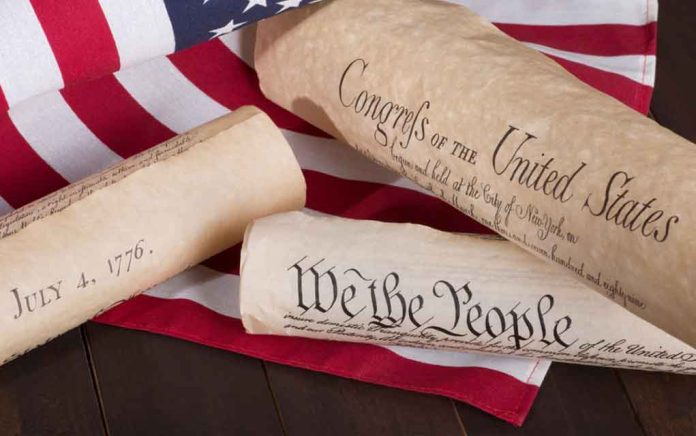 (RightWing.org) – Even with jobs closing and stay-at-home orders being issued at the state level to combat COVID-19, more drastic measures to deal with the virus are under consideration. Would you be willing to give up your individual liberties if it meant saving lives?

There are already a number of worrying trends either happening or under consideration when it comes to restricting Americans living their lives.

In regards to the practice of religion, a clear First Amendment issue, it’s clear that holding services isn’t accepted by some. A Florida pastor, Rodney Howard-Browne, was thrown in jail for holding two large Sunday services. Instead of hosting gatherings that could be a hotbed for transmitting COVID-19, some people suggest that churches start broadcasting live streams of their services — which is what many of them are doing. But should they HAVE to?

With regard to law and order, the Justice Department (DOJ) is considering extending statutes of limitations for investigations delayed by the pandemic. Holding inmates longer due to delayed court hearings was another possibility being discussed by DOJ officials. While there are arguments to be made for delaying judicial processes in the virus’ wake, these sorts of policies could quickly lead to a mass erosion of civil liberties and criminal justice rights.

In order to slow the outbreak, people are already staying at home, abiding by curfews in states like New York and New Jersey, and practicing social distancing. Still, that may not be enough. There’s always the possibility of martial law if things get too out of hand.

Martial law isn’t as far-fetched as it may seem. States are already using the National Guard to quarantine certain areas, like New Rochelle in the New York City area. If state-enforced quarantines become the norm, what’s to stop the government from rolling out the military if the pandemic were to spiral out of control?

Americans are already being asked to sacrifice much in order to protect others, and the various measures put into place right now are, in fact, saving lives. By limiting exposure of the virus to children, the elderly, and the immunocompromised, we’re giving them a better chance to avoid the very real risk COVID-19 poses to them.

Poll: Are You Willing to Sacrifice Your Personal Freedoms to Save Lives?

Should we be doing more?

If it meant that you had to give up your individual liberties to save lives, would you do it?

Just how far are you willing to go?