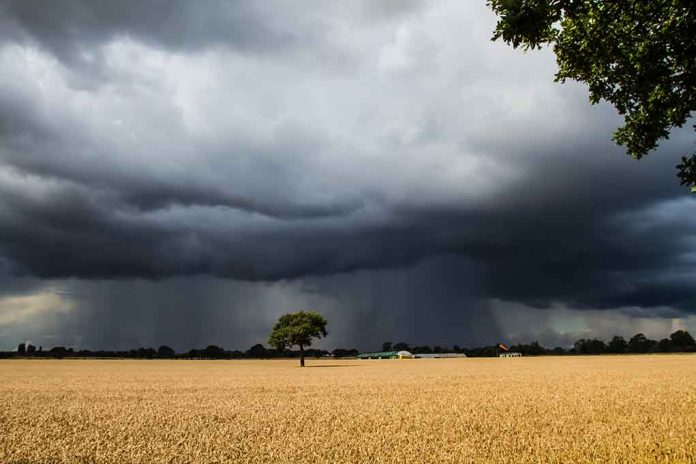 (RightWing.org) – Prior to the COVID-19 pandemic that led to Democratic-led state shutdowns of businesses and lockdowns of society, the US economy was growing at rates not seen in at least two decades. It was the first time many Millennials and Gen Zers experienced a growing economy. During the Obama administration, the economy never sustained growth above 3% in an entire year. Since Joe Biden took office in January 2021, the economy has sunk dramatically to the worst levels since the late 1970s and early 1980s.

On Tuesday, April 12, the Labor Department reported that inflation skyrocketed to 8.5% in March. Consumers are feeling the four-decade-high price hikes on virtually everything they purchase. Homes, cars, gasoline, utilities, groceries, consumer goods, and services are producing sticker shock for potential buyers. On Monday, former Trump Adviser Peter Navarro told Newsmax the perfect economic storm is raging that could be with America for many years.

Navarro said the perfect storm of stagflation is approaching quickly. So, what is stagflation, and why is it a severe threat to the US economy and your bank account? Several factors play into the economic issue, which is precipitated by a recession. In layman’s terms, stagflation can occur when:

According to Fortune Magazine, there could be some good news during economic downturns. Perhaps the GDP and inflation are high, but unemployment is low, or vice versa. Yet, during stagflation, there is nothing positive.

Navarro pointed out the economic indicators show stagflation is on the horizon as stock prices are on the decline and bond prices push downward, demonstrating the potential for a recession. According to Bank of America chief investment strategist Michael Hartnett, the US is bracing for an upcoming recession shock.

The former Trump adviser said the finger of blame for the looming recession and stagflation could be pointed only in one direction —- left. He noted that President Joe Biden deserves his share, but added he’s far from alone. He said House Speaker Nancy Pelosi (D-CA) and congressional Democrats were also to blame over their nearly $2 trillion spending package in March 2021.

Regarding Biden, he helped precipitate inflation through environmental policies that blocked oil companies from drilling on federal lands and revoked the Keystone XL Pipeline permit. Now, he wants to allow refiners to include 15% ethanol in fuel this summer, even though it causes smog. So, did he backtrack on his environmental agenda by substituting drilling and oil pipelines for ethanol?

On Wednesday, oil prices rose by 4% and closed at over $104 per barrel, and stocks closed lower after the massive inflation report over concerns company profits will suffer.

So, is America headed for the perfect stagflation storm?

We are all about to find out.