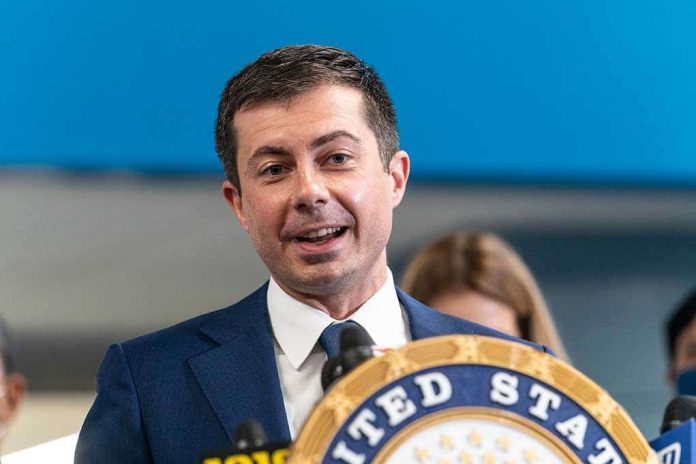 (RightWing.org) – President Biden’s transportation secretary, Pete Buttigieg, set off a social media firestorm in April 2021 after telling TheGrio host April Ryan racism was deliberately “built into some of our highways.” According to him, the construction of low overpasses “wasn’t just an act of neglect… [it was] a conscious choice.” Somehow, Buttigieg managed to make things even worse earlier this week.

This is not parody. pic.twitter.com/bzbplAnfqO

On Monday, November 8, April Ryan asked Buttigieg about his earlier remarks during a White House press briefing promoting Biden’s gazillion-dollar infrastructure plan. Buttigieg said he found it surprising that people reacted when he claimed the government designed overpasses to block buses “carrying mostly Black and Puerto Rican kids” from going to a “beach.”

Not yet satisfied he dug his own grave deep enough, Buttigieg ventured onward, claiming previous administrations designed highways to divide White and Black neighborhoods. According to him, highway and overpass designs “obviously reflect racism” in bygone days.

Buttigieg concluded his response by saying it was time for Americans to accept “that simple reality,” acknowledge the errors of the past and embrace Biden’s allocation of a billion dollars for “reconnecting communities.”

Believe it or not, you can go to the White House summary of Biden’s multi-trillion dollar “Build Back Better” plan and see for yourself a line entry that reads: “Reconnecting communities — $1 [billion].”

What do you think of the White House plan for your hard-earned tax dollars?