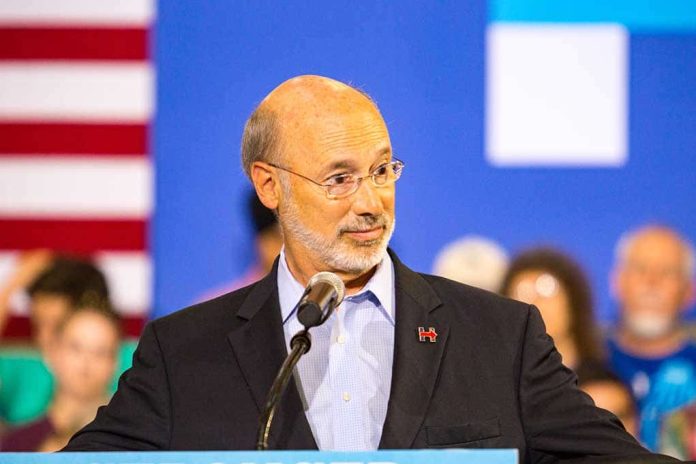 (RightWing.org) – Since the summer of 2020, Republican lawmakers across the US have tried to curb or roll back emergency powers used by governors during the COVID-19 pandemic. In particular, the Democratic governor-led states of California, Michigan, New York, and Pennsylvania were hit hard by overreaching leadership. In California, Gov. Gavin Newsom is facing a recall election later this year over his handling of the pandemic.

In a first-in-the-nation rebellion, Pennsylvania voters decided enough was enough. Starting in March 2020, Pennsylvania Democratic Gov. Tom Wolf (D) has been using emergency powers granted to him under the state Constitution and law to harshly close the state during the COVID-19 pandemic. The governor locked out the GOP-led legislature and refused to work or communicate with legislators. The relationship between the governor and the powerless legislative branch soured as the governor ignored them month after month.

When Wolf shut down the state in March 2020, the original order was for two weeks to flatten the curve and allow hospitals time to fully prepare for a possible worst-case scenario. Weeks turned into months and then into a year. The governor argued that the economy couldn’t reopen if people were sick. Republicans countered it shouldn’t be one or the other as unemployment skyrocketed to 16% in April 2020 before settling into the low 7 point range from September to March 2021.

What Did Voters Approve and Is It a Sign of Things to Come?

As the governor used his powers unilaterally to close businesses, schools, and mandate masks, the legislator placed two Constitutional amendments before voters to curb his powers:

With 81% of precincts reporting, voters approved both measures with approximately 54% of the vote. On Wednesday, state GOP leaders said it was a victory for individual rights, and that voters moved to ensure that checks and balances were restored to ensure a healthy government.

While Pennsylvania voters ended one governor’s overhanded approach to the pandemic, it could be a sign of things to come across the country. Republican National Committee Chairwoman (RNCC) Ronna McDaniel tweeted that Pennsylvania is a warning sign to power-hungry Democrats that accountability is coming in 2022.

Time will tell if voters hold other power-crazed politicians accountable. For the moment, at least one is curtailed by a constitutional amendment until voters have a say in 2022.