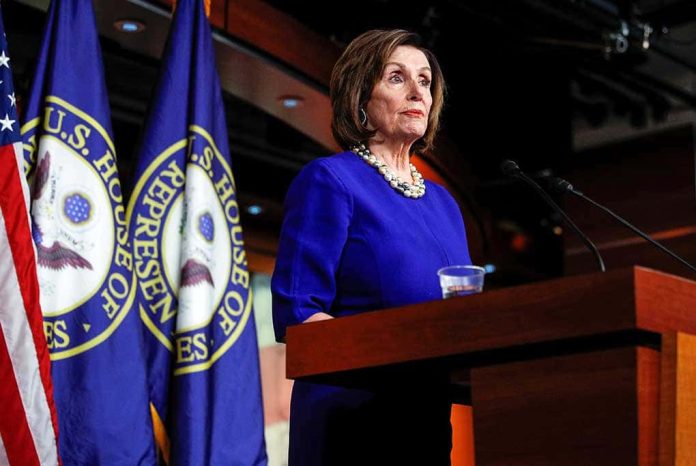 (RightWing.org) – House Speaker Nancy Pelosi (D-CA) is aching to pass the most far-Left social and climate legislation since the 1960s. Moderates want a guarantee the House will vote on the Senate bipartisan infrastructure deal. On Tuesday, August 24, Pelosi and a group of House moderates both got a little of what they wanted, and the Left got hit with a small torpedo that could do a lot of damage.

In the wee hours of Tuesday morning, it looked like negotiations were progressing to pass a vote allowing the House to unlock the $3.5 trillion reconciliation process. Pelosi reached deep into her bag of tricks. What she got for her efforts was a Band-Aid.

Make no mistake; there is a gaping wound in the Democratic Party covered up by the largest Band-Aid ever created. The Left is acting as if the $3.5 trillion budget bill is a done deal. But, Congress hasn’t approved a single dollar yet, and there’s a tough road ahead before they do. Moderates got a promise of a vote by September 27 on the bipartisan infrastructure deal without guaranteeing that House Democrats will unite to vote for it.

As of Tuesday night, there isn’t a single thing for Congress to gloat about. All Pelosi did was create an impression that her party isn’t collapsing — that’s it. Moderates can’t point to a passed bipartisan infrastructure bill, and the Left is hopping mad it lost the leverage needed to ensure passage of their social and climate spending package.

What did the last 48 hours really show? It demonstrated that in the House, where three votes can kill a bill, and in a 50/50 divided Senate, Democrats are not a unified governing force that can assert its will. That was predictable after Democrats didn’t meet expectations in 2020. They expected to increase their margins in the House. Instead, they lost 13 seats.

Moderates Secure Promise From Pelosi on Reconciliation But Will It Kill the Bill?

Across the media, one thing they aren’t discussing is the leverage centrists now have over the Left. While House Moderates are open to the process, they have a ways to go before finalizing the legislation. Pelosi conceded that the House Democratic leadership would work with moderate Sens. Kyrsten Sinema (D-AZ) and Joe Manchin (D-WV) against the wishes of the far-Left.

Neither Sinema nor Manchin finds a $3.5 trillion bill acceptable. In the evenly divided Senate, the bill dies if one Senator backs out, so they must be 100% united. Sinema is a hard no on the massive spending level. Manchin’s concerns go beyond the money to expanding social welfare programs and climate proposals that will impact his deep red energy state of West Virginia.

The devil is always in the details, of which there are none yet. So, while Senate Budget Committee Chairman Bernie Sanders (I-VT) congratulates the House on voting to start the process, it’s far from guaranteed. After the Tuesday vote, centrist Rep. Jim Costa (D-CA) said, “We’re not gonna vote on a measure that doesn’t have 51 votes in the Senate.”

The Left sees the $3.5 trillion proposal as the key to winning re-election in 2022. In moderate districts, it’s toxic to their chances of winning. In the worst-case scenario, centrists dial back the Left’s ambitious plans significantly. In the best-case scenario for conservatives, the Left and center can’t agree and kill any hopes of sending a bill to the president’s desk.

The negotiations are likely to go silent for several weeks now that the House is back on summer recess until September 20. When they come back, they’ll have not only this issue sitting on their plate. They also have to deal with the debt ceiling, federal budget, and pandemic relief programs. Infrastructure may stall into November. If Pelosi keeps her word, the House will pass the bipartisan bill by a narrow margin in late September, and the Left’s leverage will be gone.

Stay tuned. This story will twist and turn. In the end, the outcome is likely to be a much smaller bill or no bill at all.