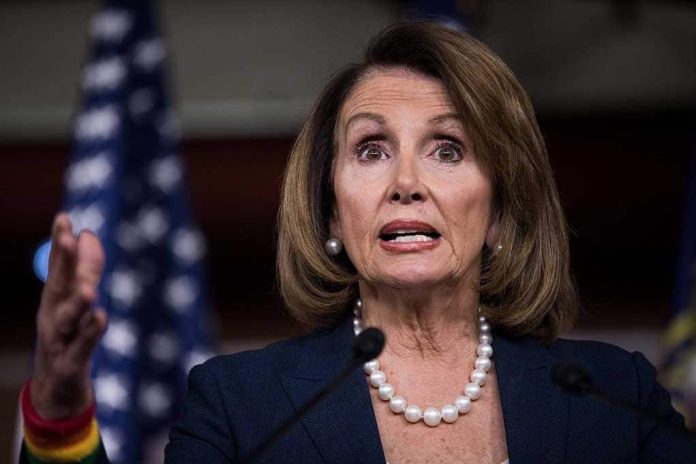 (RightWing.org) – It’s an ongoing mystery. Why do politicians make promises they can’t keep? On Tuesday, September 28, America woke up to learn that something significantly changed overnight, even if many didn’t notice the slight tremble that could be a precursor to a potentially large political earthquake. House Speaker Nancy Pelosi (D-CA) flipped on her demand that the bipartisan infrastructure bill pass at the same time as a potential $3.5 trillion socialist free-for-all partisan reconciliation bill.

In addition to the news of Pelosi’s broken promise to the Left, details of the massive bill are starting to trickle out. Some spending is wildly questionable as the Left proposes funding climate change and rewarding unions in what looks like a bribe.

Pelosi Turns on the Left

On Monday night, Pelosi summoned Democrats for a call to update the caucus on where things stand. Shocking to the far-Left and delighting Moderates, Pelosi turned her back on the promise to hold the $1.2 trillion traditional infrastructure bill hostage until the Senate passes its reconciliation bill to expand social welfare programs, provide free college education, and fund climate change proposals. The stunning move was set in place in late spring when Pelosi moved slowly. She waited until the last moment to allow four major issues to percolate at the same time: the two-track infrastructure deals, funding the government, and the debt ceiling.

Pelosi blamed Centrists for her reversal and the need to pass a continuing resolution to fund the government by Thursday at midnight. Unsurprisingly, the Speaker said last week Democrats were on schedule to vote for both the bipartisan and reconciliation bills at the same time. It’s not certain how Pelosi came to that conclusion, except that she expressed dismay at learning the House would have needed to accommodate moderate Senate Democrats 10 days ago.

Really? Here’s what really happened. Pelosi miscalculated and called moderate Democratic Sen. Joe Manchin’s (D-WV) bluff. For months, the West Virginia Senator said he wouldn’t vote for the bill. Only last week did they start talking to Manchin when he stood firm. On Tuesday, Manchin said there was no way to go over the countless proposals in the House bill and pass it by Thursday. Over the last few weeks, Manchin wrote a Wall Street Journal op-ed to share why he wouldn’t vote for the bill and, last week, he called for a pause until 2022.

So, Pelosi can’t pin this on Manchin. It was her failure that got Democrats into this mess. Regardless, she said the House couldn’t wait to pass the bipartisan bill. That’s got the Left stirred up now. House Progressive Caucus Chair Rep. Pramila Jayapal (D-WA) said Monday night the only way the Left will vote for the bipartisan deal is if the House votes on the reconciliation bill alongside it. Well, Pelosi said that isn’t going to happen.

The Democrats are at a major impasse.

What’s in the Massive $3.5 Trillion Package

Democrats have also started sharing what’s in the bill. Here’s a small glimpse of what we know as of Tuesday morning. If the bill passed as-is without changes, the government would spend:

Oh, and there’s also a nasty bribe for unions in the bill. Taxpayers who pay union dues would receive up to a $250 tax deduction if they join a union. Additionally, union elections would receive $5 million for electronic voting systems.