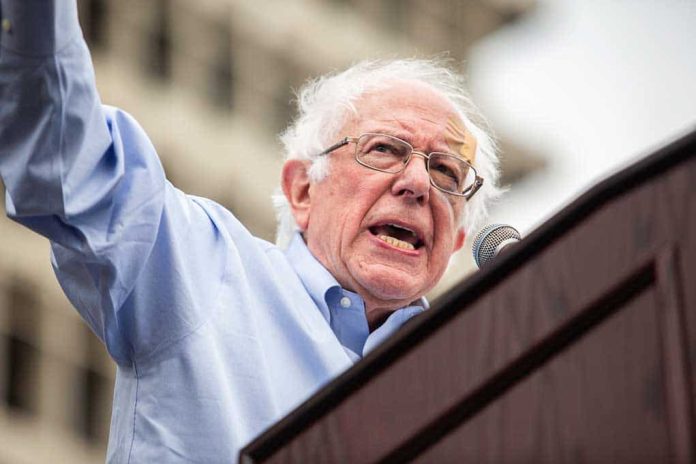 (RightWing.org) – A 20-car pileup never happens as a random occurrence. There’s always one vehicle that creates a massive bundle of twisted metal and chaos. That’s today’s Democratic Party in a nutshell. Just a few months ago, the Democrats were toasting champagne and celebrating their newfound fortunes as the majority party in both chambers. Forget that their majorities were so squeaky tight one couldn’t stick a thin piece of paper between the gaps.

The dam was always going to break. While the media focused intently on moderate Democratic Sen. Joe Manchin (D-WV), it was Sen. Kyrsten Sinema (D-AZ) that blew up the Left’s hopes and dreams all over America. She killed the Democrat’s partisan $3.5 trillion reconciliation proposal. Now that the cat’s out of the bag, House Speaker Nancy Pelosi (D-CA) and Senate Budget Committee Chairman Sen. Bernie Sanders (I-VT) are preparing for an all-out revolt by the far-Left. How they handle it will determine the long-term future of the Democratic Party.

What will they do?

On Wednesday, July 28, the Democratic majority behaved more like a minority as Republicans sat back and allowed Democrats to implode. It was inevitable. For decades, the party declared itself a big tent full of conservatives, moderates, and liberals. In the last few years, the Left pushed the conservatives out, there are few moderates, and the growing Left of the party is out of control and out of touch with most Americans.

Almost immediately, the Squad, led by Alexandria Ocasio-Cortez (D-NY), defamed Sinema as a wolf in sheep’s clothing. She tweeted a bit of good luck to Sinema for tanking the Left’s agenda. The socialist firebrand accused the Arizona senator of being a racist. In a separate tweet, AOC blasted the bipartisan infrastructure group for being racist. Charging people of racism is not the way to get things done.

The intensity is ratcheting up, and Pelosi is feeding the beast’s passions instead of demanding calmer heads to prevail.

On Thursday, July 29, Pelosi doubled down and said that the House would not vote on a bipartisan infrastructure deal until the Senate passes a $3.5 trillion reckless partisan “human” infrastructure proposal. If that’s the case, she just single-handedly tanked President Joe Biden’s signature goal for 2021. In doing so, the Speaker is inadvertently feeding two beasts at the same time.

Pelosi’s walking a tightrope consoling the 100 far-Left House members who say they will kill any bipartisan bill unless they get the far-Left reconciliation promised. From their point of view, the $3.5 trillion proposal is much less than the initial $6 trillion to $10 trillion ideas that Sanders proposed. Where the Left is concerned, they already compromised, and they’re not prepared to do it again.

The other beast Pelosi is feeding is the moderate side of the Democratic Party. They are pressuring the Speaker to renege on her pledge and allow the House to vote for a bipartisan deal. The pragmatic Democratic moderates argue that getting something accomplished looks good to their constituents who overwhelmingly want bipartisan solutions.

Who Will Blink First?

As the two sides clash, it’s difficult to see how Democrats come out unscathed. They love to argue about voter suppression. The greatest voter suppression of all is their internal Big Tent war that could turn off the voters they need in 2022.

Of course, that’s good for the GOP who’s gearing up for a fight next spring, summer, and fall to take back the House and Senate. While the Democrats fight amongst each other and destroy their own hopes and dreams, Republicans are meeting with voters, raising enormous sums of money for campaign war chests, and, occasionally, they throw a jab to keep Democrats distracted.

How all of this plays out is anyone’s guess. Will Sanders propose a smaller partisan bill? Stranger things have happened. However, in this hyper-partisan atmosphere, we’re likely where we were all along. It’s going to be hard, if not impossible, for the Left to get what it wants. If it compromises on a smaller package, it might get something, but will it?

It seems doubtful at the moment as the Left plays a game of chicken with moderates in their own party.