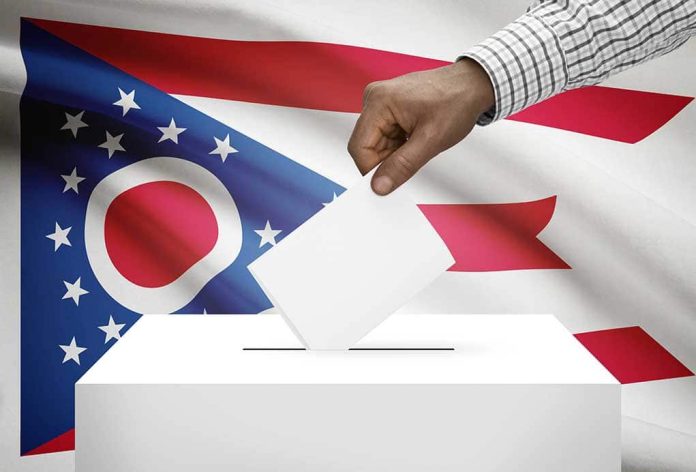 (RightWing.org) – The battle started brewing in the Democratic Party when Rep. Alexandria Ocasio-Cortez (D-NY) defeated the third highest-ranking Democrat in Congress, Rep. Joe Crowley (D-NY) in 2016. Since then, the ascendancy and influence of far-left socialists increased significantly as they hijacked classic liberals and moderates within the party. However, the movement might be hitting a wall at this point.

AOC and her gang of “Squad” members are no longer a secret. There is a battle for the heart and soul of the Democratic Party going on. The Big Tent mentality isn’t working anymore as the far-Left threatens the center with reckless abandon. However, on Tuesday, August 3, the moderate middle defeated the far-Left in a hotly contested election in Ohio.

There was a lot at stake in this primary because a Democrat is expected to win this largely Blue district by a wide margin come November. Would the leftists continue to build momentum and threaten the Democratic Party apparatus, or would the moderate-left push back? The stakes were high not just for the district, but also for the nation.

In this instance, if you’re a conservative in this district, unless you voted Democrat in the primary on Tuesday, picking the lesser of two evils isn’t even an option. Thankfully, voters did choose the lesser. Shontel Brown won with over 50% of voters. Nina Turner received 44%. While 6 points doesn’t sound like much, it’s the equivalent of a landslide in politics.

Shontel Brown is in a similar mold to former Rep. Marcia Fudge (D-OH), who held the contested Ohio seat for nearly two decades. Brown presented herself to voters as a pragmatic moderate who could get things done. She was backed heavily by establishment stalwarts Rep. Jim Clyburn (D-SC), Hillary Clinton, unions, and the Congressional Black Caucus.

Leftist Candidate Nina Turner was a former co-chair of Sen. Bernie Sanders’s (I-VT) presidential campaign. AOC and the full complement of Squad members actively campaigned for Turner, and she was supported by a large number of progressive congressmen, senators, and others from across the country. She was brash and regularly attacked fellow Democrats not in alignment with socialist, leftist policies.

What Does It Mean for Conservatives?

In the end, Brown’s victory is a notch in the Democratic establishment’s belt. If moderate-left candidates continue to win, they could rein in the tone of the party’s talking heads. The question is, will they lessen the far-Left’s policy proposals?

That’s a complicated answer. To some degree, yes, the party’s center-Left will moderate the far-Left, but by how much? Democrats typically still vote for Democratic policies, even when they go against the grain of their constituents’ wishes.

Could Brown’s victory be a foreshadowing for the far-Left in 2022? Only time will tell. For now, moderates can celebrate, but they shouldn’t expect the far-Left to lick their wounds for long. The midterms are only 15 months away. Once January hits, campaigns will start swinging into high gear.

There’s a lot on the line for Democrats as the GOP is on the prowl. It’s ready to take back the House and Senate. It’s too early to guess what could happen, but with Joe Biden’s poll numbers tanking and Americans not feeling good about the economy, inflation, immigration, and crime, it doesn’t look so good at this point.

Hold on. It’s going to be an interesting and perhaps challenging 15 months.