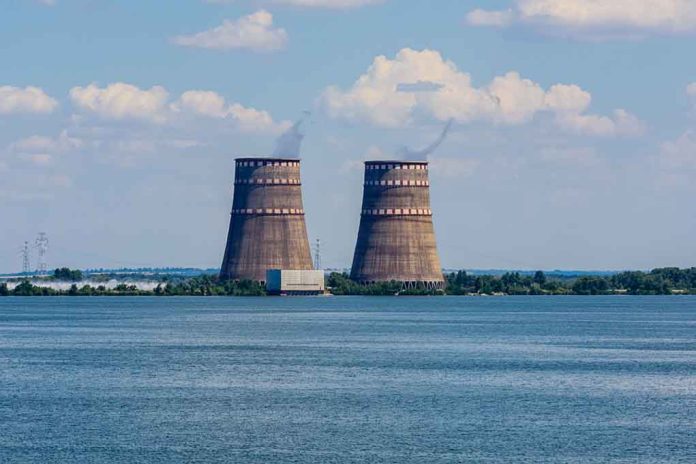 (RightWing.org) – In early March, the Russian military took territory in eastern Ukraine. On its far western front, it secured the Zaporizhzhya nuclear power plant, the largest in Europe. As both sides shelled each other near the facility, it sustained significant damage. Over the summer, the International Atomic Energy Agency (IAEA) warned that aggression in the area of the power station could cause a major meltdown of the reactors and ignite one of the world’s most destructive crises since Chernobyl.

On August 25, Ukrainian state energy operator Energoatom disconnected the final two reactors from the electric grid. On Sunday, September 11, engineers halted operations and prepared to put it into a cold state. Still, it may not be enough to stop a major catastrophe if military operations continue near the facility.

Nuclear Power Plant Not Out of the Woods

Over the last several months, fighting around the atomic station repeatedly destroyed the energy lines to the plant. To prevent a tragedy, operators began cooling the reactors. The United States Nuclear Regulatory Commission (NRC) defines a cold shutdown as when the reactor coolant system obtains atmospheric pressure and temperatures drop under 200 degrees.

Still, that may not be enough to stop an atomic holocaust if military operations don’t cease near the power station. For nuclear energy to work correctly, reactors split fuel atoms inside the core. The process creates heat that turns water into steam, which rotates the turbines that produce electricity. A chain reaction can occur if something goes wrong with that process, resulting in a disaster.

Energoatom said the increased risk of damage remains high. Since March, external energy lines leading to the plant have repeatedly been cut or destroyed. In early September, all backup lines were cut or purposely disconnected — two are currently back in operation, allowing for a safe cold shutdown. The plant operator decided the best way to prevent an accident was to shut it down. Still, there isn’t even a guarantee a meltdown won’t occur unless military activities around the area stop.

Ahead of the shutdown announcement, Ukraine called on residents who live near Zaporizhzhya to evacuate due to safety concerns. Deputy Prime Minister Iryna Vereshchuk encouraged everyone to leave and head toward Ukrainian-controlled territory as soon as possible. Recently, officials in cities in harm’s way began distributing iodine pills to residents in the event of a radiation leak.

For months, world leaders demanded Moscow withdraw troops and military hardware from around the station. Yet, the Kremlin has consistently dismissed the pleas. Ahead of the shutdown, the IAEA called for both countries to create a demilitarized zone around the area. IAEA Director General Rafael Grossi warned that officials were “playing with fire.” He said something terrible could happen if a direct attack were to hit the plant.