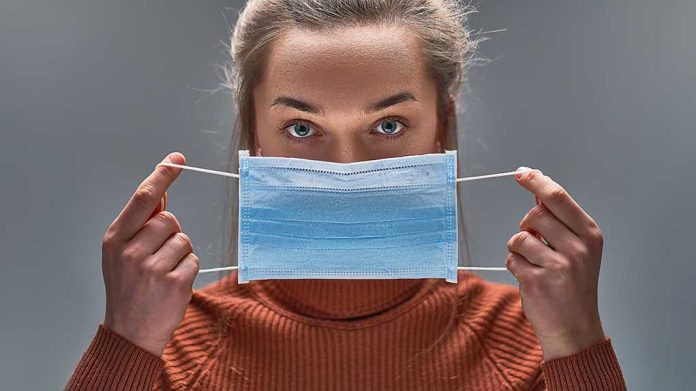 (RightWing.org) – It’s wintertime in the northern hemisphere across the world. That means people are indoors more often to stay out of the cold and are, therefore, more susceptible to illnesses. During the pandemic, social distancing, masks, and remote work helped limit the spread of common viruses such as the flu and RSV. In the United Kingdom (UK), the National Health Service (NHS) recommends people wear masks to prevent illness from multiple diseases that are circulating.

While the UK is getting hammered, viral diseases aren’t limited to the UK. In the United States, some northeastern school districts are reintroducing masks as students return to the classroom from winter break. The reason? RSV, influenza and other viruses are spiking in some areas.

Winter is often a time when viruses spread more freely. According to Medical News today, there may be a good scientific reason. A new study suggests cold temperatures outside illicit a reduction in immunity to viruses in the nasal cavity. That could explain why people tend to catch upper respiratory infections and viruses more often in the colder months of the year.

Health experts at the UK Health Security Agency are telling adults they should wear a mask when they go outdoors. In addition, they want parents to keep their children home if they develop a fever. Health professionals also say the sick should only head to a healthcare facility if it is urgent. Experts say that could help minimize the transmission of the flu and scarlet fever, which are prevalent and could continue to increase over the next several weeks.

Reports say 500 patients are dying every week, and doctors warn the situation is worse than during the worst time of the pandemic. Still, some stress the current circumstances are also different this winter than in past ones.

On December 5, 2022, Centers for Disease Control and Prevention (CDC) Director Rochelle Walensky told NPR the nation had already experienced 8.7 million illnesses, 78,000 hospitalizations, and 4,500 deaths from the flu. Since then, more people have come down with RSV, influenza, and coronavirus, which is commonly referred to as a “tripledemic.”

In New Jersey, several school districts announced mask mandates as students returned from the holiday break. Some say the rules will remain in place until further notice. Still, not every school in the state is putting the measure in place. Masking policies are also occurring in parts of Pennsylvania and Massachusetts.

Will other authorities enact mandates or make recommendations this winter?