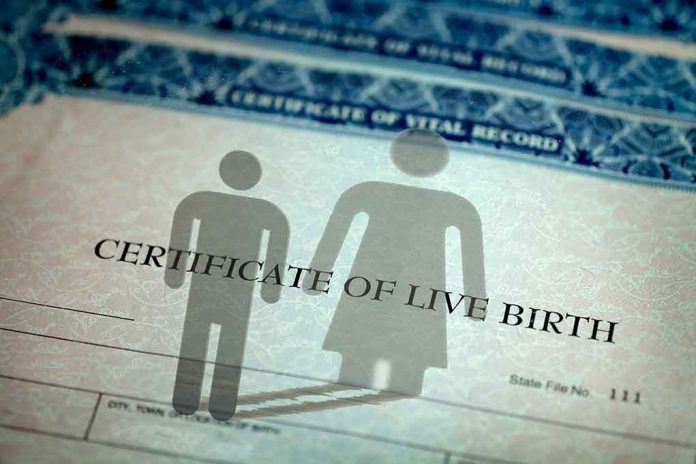 New Law BANS Birth Certificates With This In Common

(RightWing.org) – The backlash against woke ideology intensified again this week when a Republican governor banned “nonbinary” gender designations on official paperwork. Birth certificates and other government documents in Oklahoma will go back to offering the choice of “male” or “female.” The far-Left is protesting, but is the tide turning against them at last?

On April 26, Oklahoma Governor Kevin Stitt (R) signed a bill banning so-called “nonbinary” identification on state-issued documents. Last October, an Oklahoma-born activist petitioned the State Health Department to reissue their birth certificate with their sex listed as “nonbinary,” a classification that doesn’t exist biologically. At the time, Governor Stitt said he believed all people are either male or female and pledged to protect the state’s values.

Oklahoma Gov. Kevin Stitt signed a bill Tuesday explicitly prohibiting the use of nonbinary gender markers on state birth certificates, a ban experts say is the first of its kind in the nation. https://t.co/wCLPrwNalA pic.twitter.com/WpxmC5ZKmE

Oklahoma Republicans argued that the health department overstepped its authority in issuing a nonstandard birth certificate, and in November, Stitt signed an executive order preventing it from issuing any more. Now, the Oklahoma Legislature has backed him up by passing SB 1100, which Stitt signed on Tuesday. The bill specifies that the sex designation on all birth certificates must be male or female “and shall not be nonbinary or any symbol representing a nonbinary designation.”

State Representative Mauree Turner (D), a Muslim lesbian who claims to be “a queer and nonbinary femme,” criticized the bill, calling it an “attack,” but Republicans praised it as common sense.