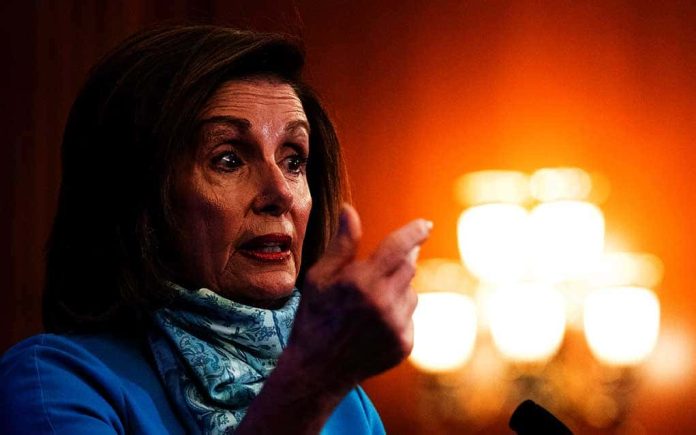 (RightWing.org) – House Speaker Nancy Pelosi (D-CA) let her mask slip last week. No, not the one she wears to virtue signal about COVID, the one that hides the real depths of her far-Left extremism.

Talking to London’s centrist Chatham House think-tank on September 17, Pelosi told the audience capitalism “has not served our economy as well as it should.” Pelosi, who attracted criticism last year after posing in front of her $20,000 fridge eating luxury ice cream, complained about inequality and the greed of high earners. She insisted, “You cannot have a system where the success of some springs from the exploitation of the workers” – a classic line of socialist rhetoric.

Pelosi slams capitalism — the wildly successful economic system that affords her the ability to broadcast to the world herself eating $14/pint ice cream from her $20,000 fridge.https://t.co/RU2MNyqBmY

Pelosi claims her goal isn’t to “depart from” capitalism but to “improve” it. However, the economic ideas she’s trying to push through the House involve the government taking money from Americans and redistributing it. That’s not improved capitalism – it’s socialism. Pelosi’s plans would kill off private investment and replace it with government funding, and that’s lifted straight from Karl Marx. Pelosi says our economic system is “…just not right” – but the devastation socialism inflicted on Eastern Europe proves hers is wrong.