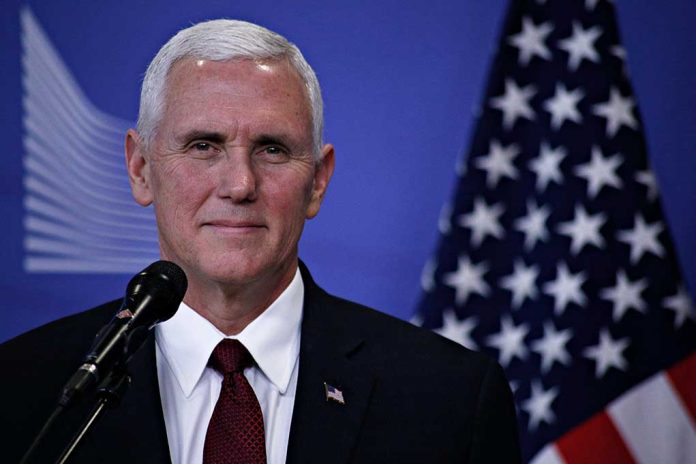 (RightWing.org) – In 2021, former Vice President Mike Pence kept a reasonably low profile. That all changed with the advent of the heated GOP primary season in the spring of 2022. More recently, the former VP has traveled the country, talked with conservative groups, and raised millions of dollars.

On Wednesday, October 19, Pence gave a speech before the Heritage Foundation, a conservative think tank based in Washington, DC. He made several bold predictions for the upcoming midterm elections. He also countered President Joe Biden’s narrative that he would sign Roe v. Wade into law if Democrats win.

On Tuesday, Biden promised to codify Roe into law if Democrats bucked perceived headwinds and won both chambers of Congress in two weeks. As of Friday, October 21, the RealClearPolitics generic congressional poll showed Republicans were up 3.3% over Democrats. In the last 10 polls, only once did Democrats have a lead, and it came in at 1%.

Over the last several weeks, momentum has shifted from Democrats last summer to Republicans in both chambers. In the Senate, a RealClearPolitics predictor map showed the GOP flipping one Democratic seat, with 7 races as a tossup. Meanwhile, as of October 21, the GOP leads 225 to 175 over the Democrats in the House, with 35 tossups.

Pence is a strong pro-life advocate. He pushed back on Biden, saying he had a “news flash” for him and predicted that come January, both chambers of Congress would have pro-life majorities, and Republicans would make a case for life in every state in the country. The former vice president added Democrats were “grasping at straws,” hoping something would stick ahead of the election.

The former VP emphasized the agenda of the GOP “begins with life” and restoring the culture of America. He added not only would Congress flip, but so would a record-high number of governors’ seats across the nation.

Pence Hits On Other Issues Outside of Abortion

Some believe Pence may make a run for president in 2024, but right now, he’s focusing on helping Republicans win in 2022. Besides abortion, there were other things the potential presidential candidate had to say about the current political landscape.

Regarding transgender athletes, he criticized Biden’s view of how they have a right to participate in women’s sports. Pence stated the government should end its “assault on women’s sports.”

On education, the former vice president asked Republicans to stand for educational freedom. He said the federal government should get out of education policy and stated it’s an issue for state and local governments.

If GOP candidates win, Pence said the path forward is still unclear between Reagan conservatives and “energetic” populism. He noted Republicans don’t have to pick one at the expense of the other, saying the GOP needs to go in a direction that doesn’t lean too firmly off course in either direction.

With two weeks to go until the votes ballots are cast and votes are counted, will Pence’s predictions come true? We don’t know, but every vote counts come election day.