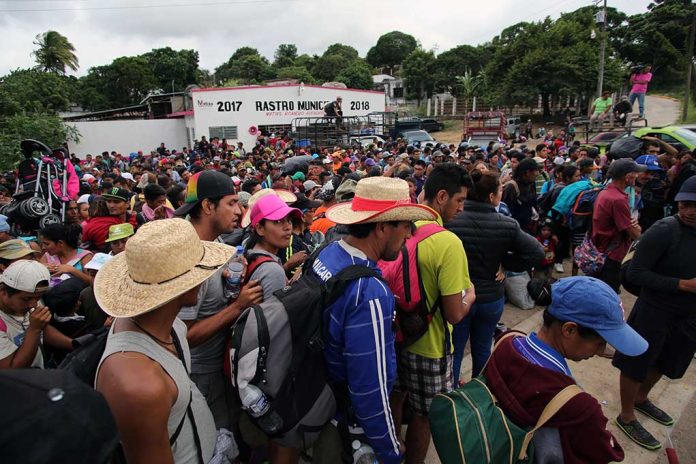 (RightWing.org) – As Joe Biden takes the oath of office on Wednesday, January 20, thousands of Central American migrants are on the move north for the first time in years. As the group of Hondurans entered Guatemala on the trek north, they were met with stiff resistance from the government with many turned back or detained. Thousands are still attempting to head north, however.

The reason they say they are coming? America is getting a new president that’s friendly to them as they’re struggling with poverty, lawlessness, and COVID-19.

Estimates suggest as many as 8,000 migrants, including families and young children, initially entered Guatemala. On Tuesday, January 19, the Guatemalan government sent over 3,000 people back to Honduras or were detained. Some smaller groups are still trying to make their way north.

Why Are Migrants Coming Now?

Throughout President Donald Trump’s four years in office, he cracked down on illegal immigration by building hundreds of miles of the border wall, incorporating new technologies, and negotiating with Mexico and other Central American countries to halt massive waves of caravans.

However, during the 2020 general election, Joe Biden said he would reverse Trump’s immigration policies. Trump White House and border officials say Biden’s policies could lead to chaos and a return of massive illegal immigration.

During a speech late in October 2020, Biden said he planned a 100-day moratorium on deportations. However, that’s not what migrants appeared to hear. Instead, one migrant told a news reporter that he heard Biden say he’s got a hundred days to get to America and that Biden would “help all of us.”

Honduran migrant: President-elect Biden is "going to help all of us." pic.twitter.com/LkrVCsXcSb

Donald Trump said in 2016 that if America didn’t control its borders, it wouldn’t have a country. As Trump leaves office, Biden promises a return to Obama era policies, including the open border. This is dangerous for several reasons.

Illegal immigration is dangerous for migrants who are often abused and assaulted on their journey northward.

According to a United States Commission on Civil Rights report, the black community is tremendously harmed by illegal immigration. An official US government agency, the report found that 6 in 10 adult black males have a high school degree or less. They are disproportionately dependent on low skill, low wage jobs. However, those jobs are in high competition with illegal immigrants, who drive down wages.

In 2018 and 2019, wages in the black community rose for the first time in decades. There are several reasons for this, including a booming economy and a smaller job pool of illegal immigrants during the Trump administration.

Another major consequence is that US taxpayers end up paying for illegal immigrants. In 2011, a 98-page report by the Federation for American Immigration Reform (FAIR) said the cost of education, healthcare, welfare, criminal and deportation efforts, and other expenditures cost the federal government nearly $29 billion per year. All told, by the time some illegal immigrants pay taxes, the net cost to taxpayers is over $19 billion per year.

Consider how COVID-19 may be infecting migrants, and potentially America, and the cost could soar even higher. How will the government control infection rates? Who will pay for their testing, housing, food, and medical care? Over 20 million Americans are out of work; what is the benefit of a flood of illegal immigrants into the US economy?

The net impact on the US economy, workers, taxpayers, and America’s health could be devastating.

It’s unknown if Mexico and other countries will maintain their agreement with President Trump under the Biden administration. However, it appears Biden and Democrats will do all they can for non-citizens of the country at the expense of America.