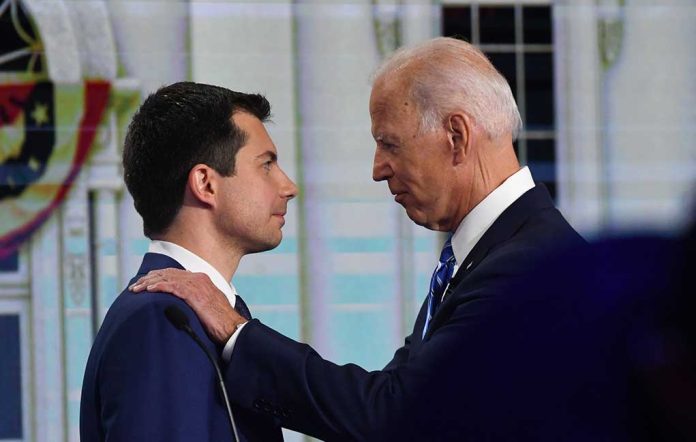 (RightWing.org) – Joe Biden spent a considerable portion of the 2020 presidential campaign cycle barricaded in his Delaware bunker, safely sequestered out of range of media representatives. After his January 2021 inauguration, White House staff reportedly attempted to isolate him from reporters whenever possible. Transportation Secretary “Mayor Pete” Buttigieg recently had to respond to serious questions regarding the president’s health.

On July 19, Rep. Troy E. Nehls (R-TX) sparred with Buttigieg over Biden’s declining mental health during a House Transportation hearing. Just over three hours into the session, Nehls displayed captioned images of the president speaking, mocking him for bumbling and stuttering through parts of his delivery in June. He also showed photographs of Biden standing next to the Easter Bunny.

"Sadly, he shakes hands with ghosts & imaginary people. He falls off bicycles. Even at WH Easter celebration, the Easter Bunny had to guide him back into his safe place" pic.twitter.com/VMYzVWTZMW

Nehls said now we can understand the mainstream media raising questions about Biden’s mental acuity, “and for a good reason.” Continuing, the representative pointed to recent incidents involving the president, like his tumble off a bicycle and videos that appeared to show Biden shaking hands with imaginary people.

Turning to Buttigieg, Nehls asked if he had spoken to other cabinet members about using the 25th Amendment to remove Biden from office.

Mayor Pete responded that he was happy to “have a president who can ride a bicycle,” adding that he would “look beyond the insulting nature” of Nehl’s question and provide an answer.

Buttigieg followed up by launching what appeared to be an exaggerated defense of Biden’s mental health without directly addressing the topic. He characterized the president as a “vigorous” colleague and boss.

Do you believe Biden is suffering from declining mental abilities since he assumed office?