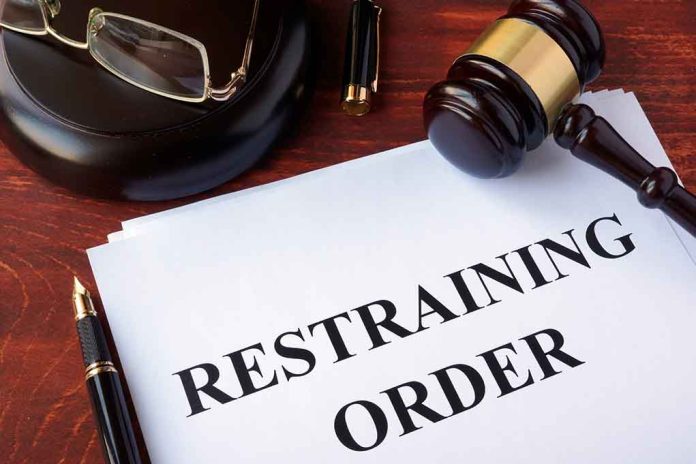 (RightWing.org) – On June 21, Rep. Marjorie Taylor Greene (R-GA) addressed the House after Capitol Police officials unsuccessfully tried to obtain an arrest warrant against a high-ranking Democratic staffer for harassing her. Later that evening, she told Just the News founder John Solomon she “was going to have to take out a restraining order” against Timothy Hysom, the chief of staff for Rep. Jake Auchincloss (D-MA).

In a stunning move, Auchincloss’ spokesperson, Matt Corridoni, admitted Hysom vandalized posters displayed outside Greene’s office. He also claimed Hysom didn’t have direct contact with Greene, adding that her intention to obtain a restraining order was “nothing more than political theater.”

However, Greene says the ongoing pattern of harassment has her rattled. She said she has received numerous death threats and doesn’t know if Hysom is behind any of them, necessitating the move to obtain a court order to protect herself from potential harm.

Equally concerning is the lack of interest on the part of prosecutors to take action on her behalf. Capitol Police officers applied for an arrest warrant accompanied by photographs of Hysom defacing her posters on two occasions in mid-March.

Greene said she recently spoke with a prosecutor who said she wouldn’t file charges against Hysom for defacing property. She also expressed amazement that Auchincloss’ chief of staff is allowed to continue working in the Longworth Office Building, where her office is located.

What do you think about prosecutors refusing to take action?