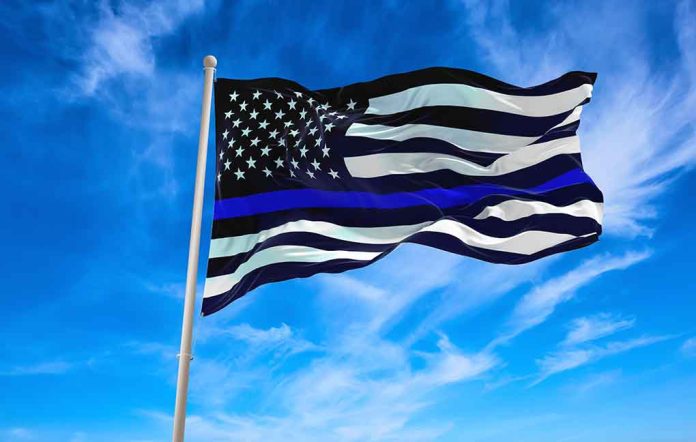 (RightWing.org) – Woke culture has taken a toll on American institutions over the last few years. For example, the Los Angeles Police Department (LAPD) recently banned the Thin Blue Line flag from its locations after receiving a lone complaint from a woke critic.

Chief Michel Rey Moore issued a department-wide email the week of January 9 announcing his decision to prohibit the display of Thin Blue Line flags in public lobbies, calling it “divisive.” Chief Moore explained that he received a complaint regarding one hanging in the LAPD’s Rampart Station.

According to the chief, the flag signified the department’s support of extremist views espoused by groups like the Proud Boys. Moore said he didn’t view it that way personally. However, he went on to contradict himself by explaining that it was “unfortunate that extremist groups have hijacked” the Thin Blue Line flag to represent their “racist,” “undemocratic,” and bigoted beliefs.

The Los Angeles Police Protective League, the union representing LAPD officers, issued a statement blasting Moore and calling his prohibition “political pandering.” Digging their heels in, the group noted their difficulty expressing the organization’s “utter disgust and disappointment” with the chief’s decision to cater to “anti-police, criminal apologists,” and woke activists. They also pointed to the flag’s significance as a symbol of support for the police and posted an image of one on their Twitter page along with a vow to continue displaying it.

We will display it proudly and will not let anyone distort the true meaning.

“…The blue line represents the men and women of law enforcement who stand in the gap between the lawless and the innocent.“@LAPDHQ pic.twitter.com/vNdfmHjwdQ

The Thin Blue Line flag traces its origins to a college student named Andrew Jacob. He started producing the pendants in 2014 in response to the public controversy surrounding police shootings in Cleveland, New York, and Ferguson, Missouri. It’s a black-and-white representation of the US flag with a blue stripe immediately below the field of stars, which supposedly represent support for law and order, and the dark space beneath them symbolizes chaos and serves as a memorial to fallen officers.