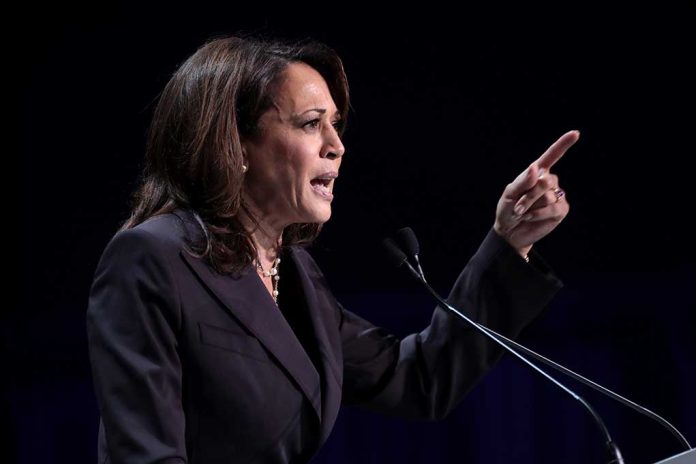 Kamala Harris Reveals Her Next Big Mission – “Time To…”

(RightWing.org) – On Monday, May 2, Politico shared a leaked draft opinion of five conservative US Supreme Court (SCOTUS) justices. It detailed that Roe v. Wade should be overturned and argued that the 1973 Warren Court was wrong to create a Constitutional right apart from the legislative branch. In the draft, which could change, Justice Samuel Alito argued that the US Constitution did not give authority under the 10th Amendment for the go-ahead blessing of national abortion.

At its core, the draft’s argument isn’t about abortion; that’s the symbol. The ruling is really about the separation of powers between the federal government and 50 sovereign states. While the Supreme Court may strip abortion from national protections, it would empower each state to legislate the issue as it pleases according to the 10th Amendment. The ruling doesn’t end abortion; it changes it in a way that satisfies the Constitution. Yet, Democrats are taking a highly emotional issue and weaponizing it in an attempt to delegitimize the SCOTUS — and Vice President Kamala Harris is taking up the standard.

On Tuesday, May 3, Harris offered an emotional appeal to the Democratic voter base. She argued that Roe created a right of privacy regarding abortion and stated pro-life conservatives want to trample on privacy rights to stop women from doing whatever they want with their bodies.

Harris attempted to argue, without support, that Americans’ rights are at risk. In an appeal to everyone, she stated that a SCOTUS ruling overturning Roe would weaken every American’s privacy rights and that the government would interfere with personal decisions about one’s life.

What Did the 1973 Supreme Court Actually Say About Abortion?

Contrary to Harris’ statement, the opinion draft argues against her claims. In 1973, Justice Harry Blackmun wrote for the majority that a Texas law that criminalized abortion violated a women’s privacy based on the due process clause of the 14th Amendment. Congress ratified the 14th Amendment after the Civil War on June 13, 1866. In one sentence, it affirmed the principles behind the Declaration of Independence, which states that no state shall “deprive any person of life, liberty, or property without due process of law.”

In 1866, Congress assumed one knew the principles of life, liberty, or property without detailing an explanation in the Constitutional Amendment. Still, in the 1970s, the SCOTUS expanded the original meaning as understood at the time of ratification to include privacy. It also asked: what is property? That’s despite there being myriads of resources to draw from that defined what those words meant.

The idea behind the 14th Amendment was to strengthen protections in the Bill of Rights, which never affirmed abortion or privacy issues as outlined in Roe, which nationalized abortion. Over the last few months, the courts overturned COVID-19 mandates for the same reason that Justice Alito outlined in his draft opinion.

So, why should abortion be treated differently than COVID-19 mandates if the principles are the same despite the differences in the symbol?

Justice Alito’s primary argument in the draft opinion was that the 14th Amendment reaffirmed the Bill of Rights and that it did not nullify the 10th Amendment, which created federalism — i.e., the separation of powers between the federal government and the states. In his logic, he affirmed that the federal government didn’t have a right to nationalize a law that has no legislation behind it from Congress, and that the government doesn’t have a right to tell states what they can and cannot do.

Since 1973, there have been no court cases challenging the privacy ruling until now. The privacy issue was ironclad among the more liberal judiciary over the last 50 years. So, most abortion cases dealt with viability as abortion advocates pushed the extremes of the issue through late-term abortions. Because of the privacy issue, men were also locked out of a woman’s decision to abort a baby — due to her privacy.

Based solely on the opinion draft, which again, is subject to change before the final ruling is released, the federal government would have no role in dictating abortion as a right at the national level. Therefore, if someone doesn’t like their state’s law regarding abortion, they’re free to seek one in a state that does allow it.

Stay tuned. There is bound to be more news on this issue.