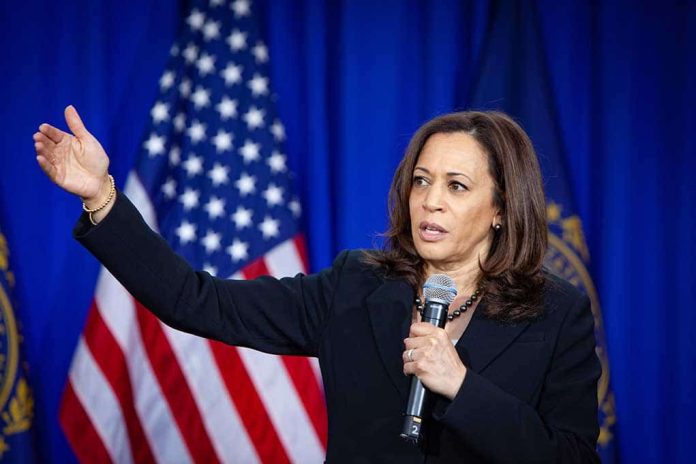 (RightWing.org) – President Biden campaigned on a promise to bring the country back together, and he still likes to talk about finding bipartisan solutions to the multiple crises threatening America. However, his own VP, Kamala Harris, recently proved yet again that this administration is one of the most hyper-partisan ever – it’s just more willing to lie about it.

The @KamalaHarris can’t even phone it in honestly https://t.co/XbIR9S2bvU

On July 20, Vice President Harris told reporters she was working with senators from both parties on voting rights legislation. Democrats are trying to impose federal rules on how states conduct elections, but Republican senators strongly oppose this infringement on states’ rights. Harris is trying to create the impression the so-called “For The People Act” has bipartisan support – but she’s failing badly.

When Harris was asked which GOP senators she’d spoken to, she struggled to come up with any names. Finally, she remembered Lisa Murkowski (R-AK), claiming, “I’ve talked with Murkowski about this issue.”

Unfortunately for Harris, Murkowski’s memory of their conversations was a little different; the senator’s spokesperson told reporters their discussions have been “solely on infrastructure.” When pressed, the vice president’s staff confirmed the Harris-Murkowski discussions had not covered electoral law. By the way, Murkowski strongly opposes the Democrat legislation, calling it a “partisan, federal takeover of the election system.”

It’s bad enough that the vice president isn’t talking to Republicans about important issues; it’s even worse that she can’t be honest about it.