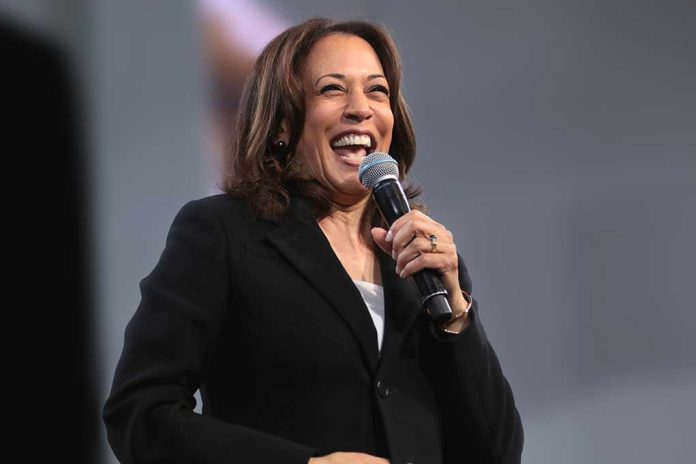 (RightWing.org) – Over the last year, President Joe Biden did everything he could to put his vice president on a pedestal. Last spring, he tapped Kamala Harris to oversee the southern border and discover why the massive illegal immigration crisis hit the US hard so hard after he took office in January 2021. Biden also asked the vice president to help champion his unnecessary hostile election takeover/reform in Congress. The president also tasked her with solving the inflation and supply chain crisis, and recently he dispatched Harris to Poland and Romania to show the region the US’s support for Ukraine.

So, what did the Biden administration get? For one, it got lots of interesting cackles and negative media coverage. More concerning, everything Harris touched has gotten worse, not better. Now, Biden is taking center stage in Europe and placing Harris in charge of promoting his domestic agenda ahead of the 2022 midterm elections. So, instead of asking Harris to solve problems, Biden made the vice president into a public spokesperson.

While Russia continues to pound Ukraine and the conflict monopolizes the media airwaves, Biden is tasking Harris with changing the narrative about the administration’s accomplishments over the last year, however minimal they may be. Administration officials say as the COVID-19 pandemic wanes, it’s time for Harris to assume a more traditional role as vice president.

So, what are the successes she’ll be touting? The White House said Harris would talk up infrastructure, expanding broadband access, and promoting Biden’s executive orders.

Will Harris Talk About Failed Policies?

In 2021, the Biden administration focused intently on far-left domestic issues. There are a lot of questions for Harris as she hits the road to talk about domestic issues. Will she talk about illegal immigration, which is still a major crisis? Since Biden took office, Border Patrol arrested 2.2 million illegal immigrants at the southern border. In the same period during the Trump administration, Border Patrol recorded only 272,000 arrests.

How will Harris defend the failed Build Back Better agenda?

What about energy production? From 2018 to 2021, the US was effectively energy independent. The Biden/Harris far-left climate agenda made America energy-dependent once again. Gasoline prices increased every month of the administration. Some energy experts suggest that ongoing price increases due to Biden’s policies are baked into the rising gas prices spiking during the Russian invasion of Ukraine.

Will Harris say whether government spending and administration policies are at the root of historic inflation, which could tip into a recession by the end of this year?

There are more questions than answers.

Will the media ask the vice president any of these questions as she tours the country to talk about Biden’s accomplishments ahead of the 2022 midterm elections?

Will she be a good representative for Democrats ahead of the November election?

Once again, the president gave Harris a task that she’s proven unable to live up to for most of her political career.

Stay tuned. There will likely be some news in the days and months ahead as Harris cackles her way to a podium near you.