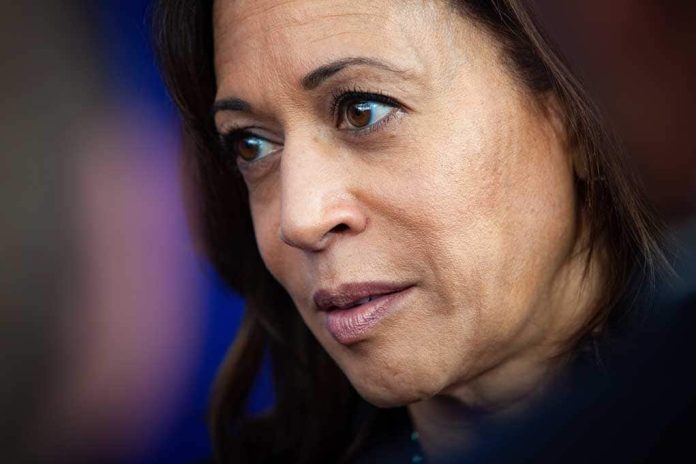 (RightWing.org) – President Joe Biden’s policies are not only disastrous at home; they are embarrassing abroad. On Monday, June 7, Vice President Kamala Harris arrived in Guatemala to kick off her bribe tour and meet with President Alejandro Giammattei, and it’s not going very well. In fact, one could call the VP’s visit an amateur hour. The self-inflicted wounds are starting to add up as Harris learns the consequences of the far-left agenda she pushed as a US senator and now as vice president of the United States.

In March, President Biden tasked Harris with fixing the crisis at the border and studying why immigrants were fleeing Central America for the United States. Under President Donald Trump, illegal immigration was under control as the former president initiated several policies that kept illegal migrants out of the country. However, Biden scrapped Trump’s policies, and the crisis exploded just days after the inauguration.

On Monday, June 7, the optics for Harris’ first state visit out of the US was a total disaster, and it’s devastating to the administration’s message and credibility. Harris’ goal was to declare the US border closed and discourage people from coming to the US. She blamed the migrant crisis on everything from climate change to government corruption as the Biden administration says it’s trying to undo the damage from the Trump administration.

Unfortunately for the Biden administration, that’s not the message getting around.

President Alejandro Giammattei isn’t on the same page regarding the root of the migrant crisis. It’s a diplomatic nightmare in the making. Before Harris could declare the US closed to immigrants, Giammattei said the real problem is not climate change or government corruption. The real problem was Joe Biden and his administration’s rhetoric during and after the presidential campaign that encouraged people to travel on foot to America.

As Harris made her way around Guatemala, protestors met her with waving signs that are probably shocking to many Democrats. Regardless, the optics aren’t good, and one can already envision the political campaign commercials. Signs read, “mind your own business,” “stop funding criminals,” and “Trump won.”

There are more embarrassing moments. It appears that Harris knows how to laugh at herself, but this takes the cookie. Literally… apparently the vice president made faceless cookies of herself and handed them out to reporters. That’s some serious narcissism. Can you imagine what they would say about Trump if he did something like that? Rush Limbaugh’s former producer Bo Snerdly couldn’t resist the opportunity to opine on Twitter.

Harris Takes Incoming From Her Own

To finish things off, Harris is now dealing with the fallout from the far-left over her comments telling Central Americans that the border is closed. On Monday, Rep. Alexandria Ocasio-Cortez (D-NY) said the comments were “disappointing.” She blamed the US for setting Central America on fire and then blaming them for fleeing after the US allegedly destabilized the area through regime change.

In any case, the Harris visit is a total disaster. It was predictable as she championed the very policies that are causing the immigration crisis. It’s typical of politicians to cause problems and then claim to be the champions who will solve them.

Will she learn anything on this disastrous visit?

Probably not much. Though, she may decide to continue her reign of silence. As the old saying goes, it’s sometimes wiser to be seen and not heard.