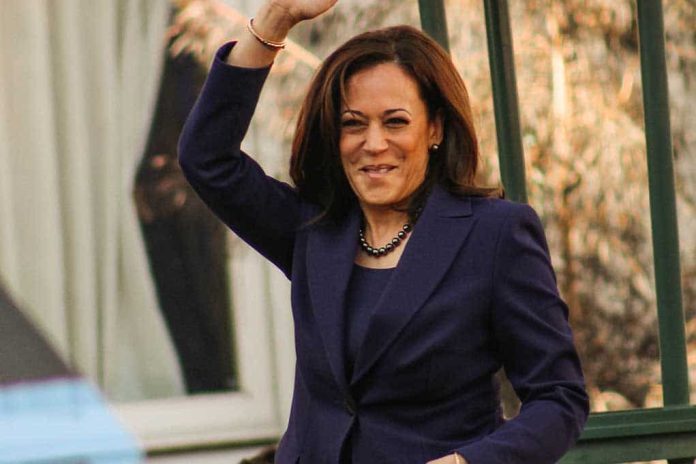 (RightWing.org) – In 2007, then-Democratic candidate for president Barack Obama said that his goal, if elected, would be to fundamentally transform America. His election set America on a path to changes that many believed were antithetical to the nation’s founding. Under the former president, jobs decreased, millions of American’s weren’t participating in the workforce by 2016, and government dependency was on the rise.

In 2016, Donald Trump temporarily changed the trajectory as the economy exploded, wages increased, and opportunity abounded. The media all but gave up hope that Trump would lose the 2020 election. Then, the COVID-19 pandemic struck. As former Obama Chief of Staff Rahm Emanuel once said, Democrats should never let a good crisis go to waste. Now Obama’s former VP is president and Joe Biden is racing faster than his former boss to finish what was started in 2008. On Wednesday, May 19, Vice President Kamala Harris got in on the action.

On Wednesday, Vice President Kamala Harris framed the pandemic as an opportunity for the Left to seize control of America in a speech at the 2021 Asian Americans and Pacific Islanders (AAPI) Unity Summit. Ironically, Harris’s speech was anything but unifying.

Harris laid out a familiar three-part plan in such a way one can already see how it’s unfolding in America right now, and unless the public knows, it’s going to be challenging to stop.

Harris said as the country emerges from the pandemic, America should be focusing on how we live, work, and vote. However, there’s much more to it than simple words. Let’s look at the heart of each one in order.

How we live – Democrats love identity politics despite its reckless and divisive nature. Harris’ idea of how we live is to focus on racism and hate crimes. In this case, it wasn’t BLM. Instead, she focused on anti-Asian hate incidents. According to Harris, the solution to the problem is to pass the COVID-19 Hate Crimes Act. The legislation doesn’t solve the problem, nor does more identity politics that divides America instead of uniting the country.

How we work – Harris isn’t interested in American’s finding jobs that provide training and opportunity to climb the wage ladder. Under Trump, America proved that the free market creates opportunity as more jobs were available than workers, and wages rose for the first time in decades. Democrats don’t believe in the marketplace. Instead, they want the government in collaboration with unions to dictate the job market as if America is stuck in a bygone era.

How we vote – In 2020, some governors ignored state election laws, and questions about voter integrity led GOP states to reform their procedures. The goal was to create voter trust in the system while still making it easy for people to vote. However, Harris attacked the new election reform laws and said the GOP was trying to suppress the Asian vote. She urged Congress to pass the controversial HR1 law that would reduce voting integrity and empower cheating in elections.

If all of this sounds familiar, it’s because it is the tried and tested platform of the Democratic Party. If conservatives are paying attention to what the Left is saying, it’s not new. All they’ve done is tweak it to meet the messaging requirements of the pandemic.

The path already exists to overcome the Democrat’s rhetoric and failed policies. It just requires some courage when Democrats start flinging their arrows.