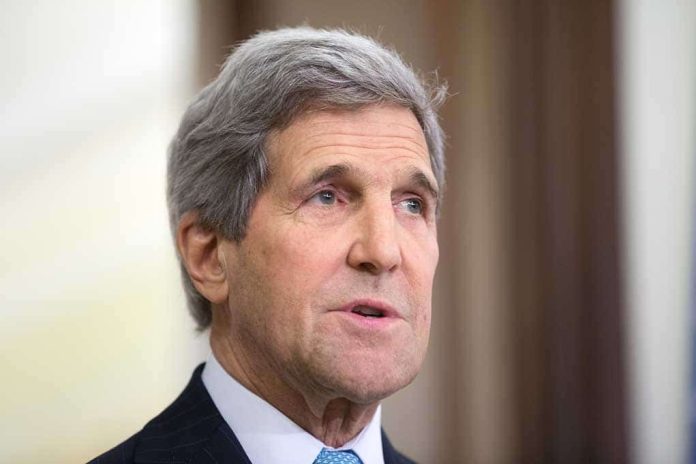 (RightWing.org) – The Biden administration’s climate chief, former senator John Kerry, is in hot water over an environmental award he received in 2019. Kerry says he was making a sensible choice; others say he’s arrogant and hypocritical.

In October 2019, Kerry, who helped negotiate the Paris climate accord while he was Barack Obama’s secretary of state, was awarded an Arctic Circle Prize for his green activism. The prize, presented in Iceland, consisted of an ice sculpture. Multimillionaire Kerry decided to help melt his own sculpture – by traveling to the award ceremony in his family’s private jet.

At the time, Icelandic media and even the Arctic Circle Roundtable chair, who presented the prize, criticized Kerry. Now, though, video of him justifying his choice has gone viral – and many are horrified by Kerry’s arrogance.

John Kerry, a real man of the people pic.twitter.com/xoxQvQT4wp

In the video, filmed in Iceland after the prizegiving, Kerry claims traveling by private jet is “the only choice for someone like me.” He argued he offsets his carbon emissions, although he didn’t say how. He said he couldn’t afford the time to travel by ship. However, commercial flights emit just 1/40 of the carbon per passenger of a private jet, and there are several flights every day from the US to Keflavik International Airport. Apparently, sharing a plane with ordinary people won’t do for someone like John Kerry.