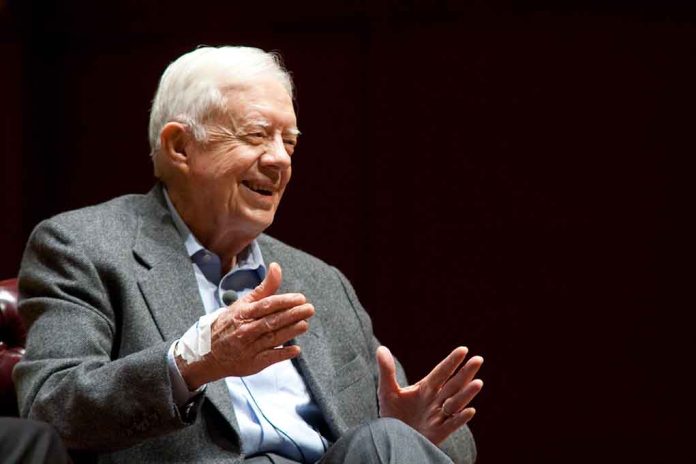 (RightWing.org) – Our oldest living ex-president has decided to re-enter politics. Jimmy Carter is backing environmentalists who want to block a vital new road in Alaska.

Since the mid-1970s, there have been plans for a road to the small town of King Cove, Alaska. The town, 600 miles from Anchorage, gives new meaning to the word “isolated.” Bad weather often shuts down both the town’s gravel airstrip and the sea crossing to Cold Bay, an even smaller town but home to the region’s only all-weather airport.

A road would provide an all-weather link for medical evacuations and other urgent trips — but there’s a snag — 11 miles of the 40-mile route runs through the Izembek National Wildlife Refuge.

FACTS: Constructing a road through the internationally significant, wilderness-designated wetlands of the Izembek National Wildlife Refuge would put iconic species at risk and undermine bedrock environmental laws in the process. https://t.co/Za75Wi0ztp

In January 2017, Congress approved a land swap that would add extra land to the wildlife refuge in exchange for building a single-lane gravel road through it, but that was blocked by outgoing Interior Secretary Sally Jewell. Under former President Trump, the land swap was revived, and the Biden administration continued with the plan. In March, an appeals court threw out the last legal obstruction, clearing the way for the road’s creation.

Now, the same coalition of environmental groups that sued to block the road before is fighting that appeal — and former president Carter is fronting the effort. Earlier this month, he filed a suit arguing that the ruling allowing the road violates the Alaska National Interest Lands Conservation Act (ANILCA), which Carter advocated for and signed in 1980. According to his filing, ANILCA designated land for two purposes, and the economic and social benefit of US citizens isn’t one of them. Carter wants to protect his legacy — but the residents of King Cove need their road.