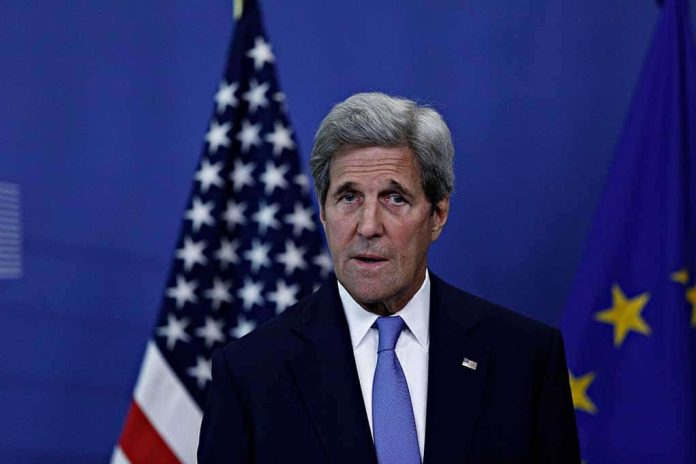 (RightWing.org) – Relations between the United States and Russia have been anything but friendly since President Joe Biden assumed office earlier this year. Biden went toe-to-toe with Russian President Vladimir Putin at a June summit in Geneva and during a follow-up phone call on July 9 about ransomware attacks originating from Russian soil. Yet, despite the contentious relations between the two world leaders, Biden decided to send John Kerry to Russia.

Kerry reportedly traveled to Russia in his official capacity as the US Special Presidential Envoy for Climate this week. On July 12, Kerry posted a tweet with photos of him meeting with Russian Foreign Minister Sergei Lavrov. His tweet implied the meeting concerned global climate change initiatives “on the road to Glasgow,” referencing the 2021 United Nations Climate Change Conference.

It is critical we enhance global climate ambition on the road to Glasgow and beyond. A good start discussing opportunities with Russian Foreign Minister Lavrov of @mfa_russia to tackle the climate crisis. pic.twitter.com/l2we80lmBL

Under the current circumstances, one has to wonder if there’s more than meets the eye going on at that meeting. For one thing, the COP26 conference isn’t scheduled to take place until November of this year. For another, it’s not like Kerry didn’t serve as former President Barack Obama’s Secretary of State for the duration of his first term.

Neither Biden nor Obama is known for transparency, and the sky appears to have become the limit for Kerry in the wake of his failed campaign for president against George W. Bush in 2004.

What’s the agenda happening here, climate change, cybersecurity, or something else? Asking for a concerned nation that’s tired of being deceived.