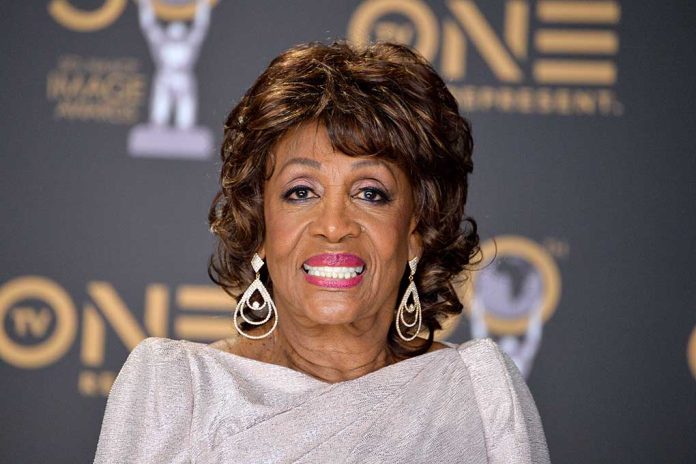 (RightWing.org) – In the wake of the January 6 riots on Capitol Hill, one would think Democrats would be more careful with their choice of words and intent. Before leaving office in late January, former President Doanld Trump was impeached in the House of Representatives on charges he incited a riot. As an elected official and President of the United States, Democrats alleged that he broke his oath of office and violated the public’s trust.

When it comes to Democrats holding each other accountable, apparently there are no such standards. On Saturday night, April 17, just blocks away from where former police officer Dereck Chauvin is on trial for murdering George Floyd, Rep. Maxine Waters (D-CA) flew across state lines to urge protestors to “get more confrontational.” Considering the violence and destruction of property in the area, what could Waters mean other than to incite more violence?

This is the same hypocrite who claimed that Trump incited his supporters and tried to start a civil war.

Okay for Me, Not for Thee

As a leader in the Democratic Party, Maxine Waters enjoys a long and storied history with inflammatory comments. In 2017, she encouraged anti-Trumpers to hunt down administration officials and harass them in public. Now, she’s trying to open up a tinderbox waiting to erupt at a second’s notice.

Imagine for one moment a Republican saying something like this… oh wait, we don’t have to imagine. On January 6, thousands of Americans protested peacefully in DC and were labeled insurrectionists for protesting what they believed were election wrongs committed against America. Only Donald Trump never told anyone to be violent.

Apparently, it’s okay for Waters to incite a riot someplace where she will never experience the consequences. However, she still needs fencing up around the Capitol building to protect her from the public in Washington, DC.

On Saturday night, April 17, the Congresswoman broke the law by being out past curfew because she didn’t agree with it. Her heated rhetoric rivaled anything former President Trump was accused of saying. As a result, House Minority Leader Rep. Kevin McCarthy (R-CA) said if House Speaker Nancy Pelosi (D-CA) doesn’t move to punish Waters for inciting a crowd, he will take action.

Rep. Marjorie Green (R-GA) said she would immediately introduce a resolution to expel Waters for her heated rhetoric. She said Waters is “a danger to our society.”

If Pelosi doesn’t act, expect Republicans to increase the pressure on her and Waters. Hypocrisy is unacceptable after the January 6 riot and ensuing impeachment against Trump. The only action is fair and equitable treatment against any member of Congress who incites violence.

There is no more politics as usual, and this kind of rhetoric should no longer be acceptable by either party.

Let’s expect our leaders to be consistent and set politics aside. Just don’t hold your breath waiting for it to happen.