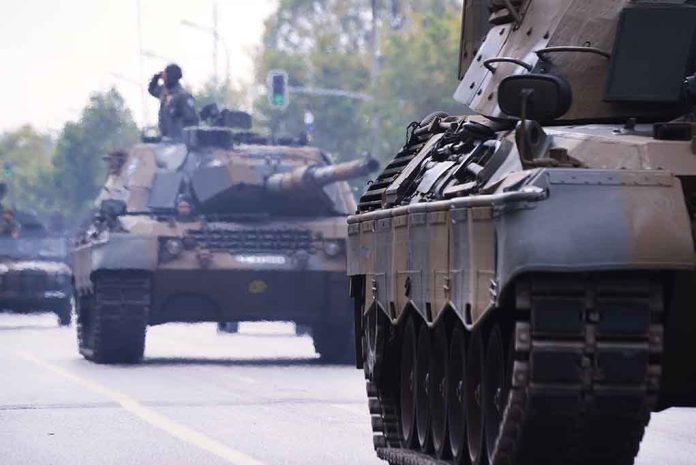 (RightWing.org) – Social media users have been sharing dramatic video of tanks in the streets of a Chinese city. Captions and comments say the tanks are there to prevent citizens from withdrawing their money from the country’s struggling banks. However, there are questions about what’s really happening.

In April, four banks in China’s Henan Province stopped allowing withdrawals. The banks claimed this was because they were upgrading their systems — but the main stockholder in all four had been arrested in March for financial crimes. Thousands of customers immediately tried to withdraw their money, and when the banks kept refusing, angry depositors began protesting. At least one protest, on May 23, was broken up by police.

A video of tanks in China has gone viral. Many claim it shows the government suppressing protesters in Henan. But the video was actually filmed in Shandong and according to our sources, the tanks were deployed as part of military drills #China #military https://t.co/y5mLZNKehw

Beginning on July 18, videos started circulating on social media showing tanks rolling down crowded streets, with comments claiming that the tanks had been sent in to protect banks from angry customers. People drew comparisons to the notorious 1989 Tiananmen Square massacre when up to 3,000 protestors were killed by communist troops and tanks.

Analysis of the videos, however, throws some doubt on these claims. One video, which claims to show tanks outside a Henan bank, features a distinctive yellow-lit building which is actually a hotel in Rizhao City, in the neighboring Shandong Province. Police in Shandong had announced that military exercises would be carried out from July 14-16, and Rizhao locals confirm that the tanks in the video were taking part in those exercises.

There are definitely protests about the Henan banking scandal — but so far, there’s no evidence the communist regime is responding with tanks.