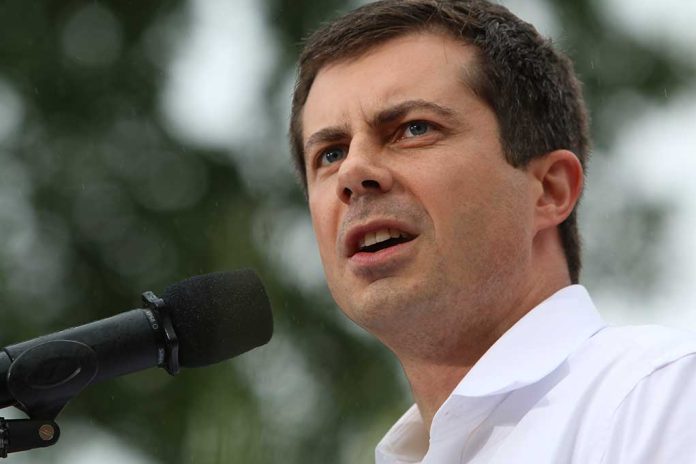 (RightWing.org) – Democrats know there is more than one way to skin a cat. Throughout the summer, parents across America expressed concerns that schools were teaching Critical Race Theory (CRT) to their kids in public schools. In Virginia, a massive backlash contributed to Republicans sweeping up the governorship, lieutenant governorship, and the statehouse. According to an American Principles Project poll, 58% of voters opposed schools teaching CRT in Virginia schools.

Long before there was a CRT battle in public schools, the Biden administration introduced the groundwork for the controversial program to the federal government. In early November, Transportation Secretary Pete Buttigieg said he intended to use money from the bipartisan infrastructure bill to address racism in highways and bridges. On Thursday, December 2, America learned that the Department of Transportation (DOT) introduced new training protocols that sound an awful lot like the CRT stuff Democrats claim doesn’t exist.

Buttigieg Champions CRT in the Department of Transportation

CRT started as an intellectual exercise in law schools in the 1960s and 1970s. Since then, it’s worked its way down through the college curriculums and into society. It claims to examine how institutions, laws, and policies perpetuate racism throughout society. A closer look at it reveals an emerging reality. CRT is hostile to a free market capitalist system by equating it with racism. It teaches that one doesn’t get money, homes, or possessions because they worked for it… one got those things because of the white privileged society.

Early in the Biden administration, Buttigieg started overtly saying that America’s infrastructure was racist. He said highways and railroads purposely divided white and black communities. That was true in some parts of the country, but it doesn’t mean that’s happening anymore.

Buttigieg’s DOT plans to tear down or rebuild highways and overpasses that were inherently racist in their placement and/or design. Yet, he offers limited examples, and in one instance, quotes a book about NYC civic planner, Robert Moses, that other historians now say was overzealous and that experts doubt shows any indication of racism.

Instead of using clearly established and accepted facts, Buttigieg seems to be using his narrative to fashion alleged facts that don’t support his statements.

Is a New DOT Training Manual an Example of CRT?

It appears that Buttigieg’s adoption of CRT is complete. The Department of Transportation is introducing a new training agenda for all staff that says non-white people, women, and non-citizens are oppressed in the United States. Agency employees are encouraged to be part of an anti-racist, multicultural organization. In addition, the DOT provides employees a chart to track their status as members of privileged groups or targets of oppression.

The training dives into defining individual, institutional, and structural racism.

What’s happening is not an education about the wrongs of the past. One has to wonder if this is government-sponsored manipulation. This teaches people that one side is an oppressor and the other is oppressed. Who benefits from this kind of thinking?

Perhaps that is the real question that we all should be asking.

So, is the DOT turning into a CRT laboratory?

You be the judge.