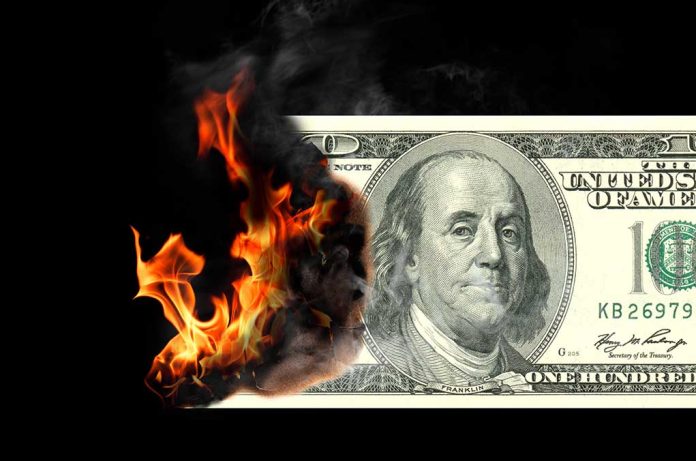 (RightWing.org) – From 2017 to early 2020, the US economy roared as one of the best in several decades. Good paying jobs were plentiful for good reasons, and wages and discretionary income were up while inflation was virtually non-existent. Then, the pandemic hit in March 2020. Despite the governor-induced shutdowns, most economists say the 2020 recession was extremely short-lived. By the end of April 2020, it was already over.

After studying trends and developments, two leading economists recently published research showing the US economy may already be in a recession.

That begs the question: Is America’s economy in trouble?

What Could Be Behind a Looming Recession?

It doesn’t take a rocket scientist to see that something is wrong with America’s economy. After $5 trillion in government spending over the last year, most economists projected robust growth as the US emerged from lockdowns and restrictions this past spring. However, Biden’s vaccination employment mandates are the latest in a long list of policy decisions driving away workers.

The president committed to a war on energy, inflation is sky-high, the employment situation is growing wary as businesses raise wages to entice workers, and the broken supply chain is leaving store shelves empty.

With all these issues happening at once, how could there not be a threat to the US economy?

Economists David Blanchflower of Dartmouth College and Alex Bryson of the University College London discovered that since the 1980s, every recession came after an 18-month drop in consumer expectations with at least a 10-point drop in either the Conference Board Consumer Confidence or Michigan Consumer Sentiment indices. In addition, they also found that a single month rise in unemployment of 0.3% or more and 2 consecutive months of unemployment rate declines were highly reliable indicators of a recession.

Guess where America is right now?

Both economists reported that the two leading indices are highly troublesome. The Conference Board Consumer Confidence index is a monthly report that measures business conditions and the likely business environment for several months ahead. It measures consumer attitudes, buying intentions, vacation plans, consumer expectations for inflation, stock prices, and interest rates. Blanchflower and Bryson’s report says economic expectations peaked in March 2021 as the economy emerged after lifting COVID restrictions. Then, expectations fell 26 points through September.

The Michigan Consumer Sentiment Index (MCSI) is a monthly survey of consumer confidence. It accounts for peoples’ feelings about their personal financial health, the short-term health of the economy, and the prospects for long-term economic growth. The two economist’s research says the indicator peaked in June and fell 18 points by August. This indicates extreme concern by consumers and is a leading indicator that America is likely already in a recession after 18 months of struggling since March 2020.

Economists generally define a recession as two consecutive quarters of economic decline in economic activity. It includes, but may not be limited to, measurements such as employment rates, inflation, manufacturing output, and wholesale-retail sales.

As Democrats in Washington, DC, negotiate to spend trillions of dollars more in an already overheated economy, things could get worse before they get better. Will the vaccination mandates force enough workers out of employment that it affects everything from retail sales to airlines?