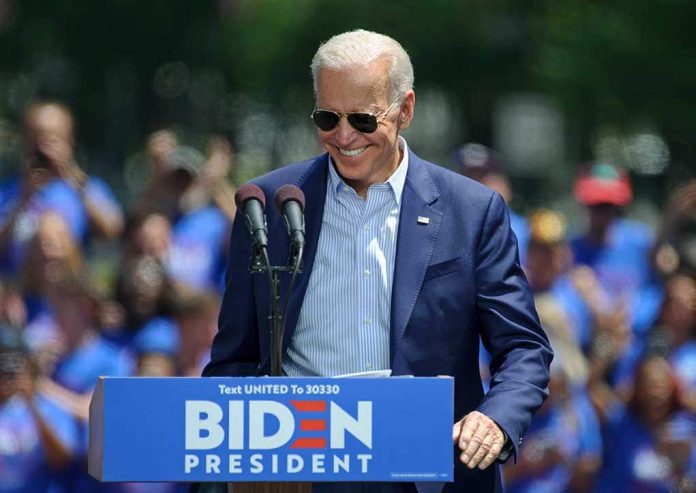 (RightWing.org) – Since Joe Biden was inaugurated on January 20, America’s been embroiled in one controversy after another. The immigration crisis continues to spiral out of control on the southern border while the administration does little to solve the problem. The government is spending trillions of dollars and causing inflation to climb rapidly. Woke Democrats are pitting Americans against each other through far-left policy initiatives, such as defunding the police, while allowing crime rates to rise throughout America.

If that’s not bad enough, Biden’s dividing America through his racial rhetoric, sanctioning government reverse discrimination and endorsing legislation that would hijack America’s elections. Now, a new Fox News poll is out, and Americans are quickly making their minds up about the president. If the trend continues, it could be lights out for Democrats in 2022 and beyond.

Is America Turning on Biden’s Agenda?

During the 2020 general election, then-presidential candidate Joe Biden pulled the wool over many peoples’ heads. He repeatedly claimed he was the guy who defeated the Left and the socialists while promoting himself as a moderate. However, his rhetoric didn’t add up with his written policy positions, which were clearly designed to court far-left enthusiasm for his campaign.

It appears that voters are catching on to the bait and switch.

As the Democratic presidential primary campaign season kicked off in December 2019, 36% of voters said that Biden was too liberal. In less than 18 months, the president gained 10 points on the question. That could be devastating.

It doesn’t get much better for the president. A clear majority of Americans believe Biden’s spending proposals are too much. While 17% say it’s not enough, 33% say it’s about right, and a whopping 47% say it’s too much.

Still troublesome, 44% say the administration’s proposals are meant to “jumpstart the economy,” while 47% say he’s transforming America through the far-left agenda.

What Does It All Mean?

In only five months in office, the polls suggest that Biden is going backward with most voters. According to Gallup, Liberals make up the smallest share of the political divide at 25%. A whopping 71% identify as either conservative (36%) or moderate (35%). It appears the majority are not approving of Biden’s tactics as they learn the difference between his campaign rhetoric and the impact of his liberal policies.

The president and congressional Democrats are forcing an agenda on America that many don’t want. Yet, Biden must genuinely believe there’s a mandate that doesn’t exist to transform America. Most people love America. They want to make it better, not transform it.

Polls are only snapshots of moments in time. However, if the trend continues through the end of summer and into the fall, there could be warning signs for Democrats ahead of the 2022 midterm elections.

The question is, will they heed the warning or misinterpret the voter’s views?