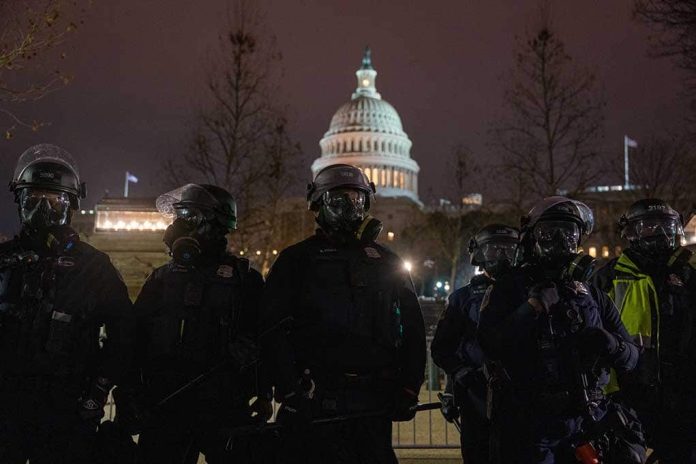 (RightWing.org) – America is experiencing a pivotal moment. The Left is in control of Washington, DC, albeit by extremely thin margins. Yet, it’s executing a radical agenda against traditional Americans who love their country and liberties. If this sounds extreme, consider the facts.

In 2020, Democratic politicians shut down freedom of religion in violation of the US Constitution, encouraged violent riots and autonomous zones in cities across America under the guise of social justice, and deprived people of their livelihoods during the pandemic while ignoring their own orders.

In 2021, Joe Biden became one of, if not the most lawless president in US history. The administration ignored federal law and court orders regarding immigration, sought to destroy the energy sector, offered to subsidize state lawbreakers with federal dollars, and enacted an illegal eviction moratorium.

Congressional Democrats are on a tear to transform America by revolutionizing its capitalist society into a semi-socialist hybrid economy, reforming voting in their favor, defunding the police, and making it harder for law-abiding citizens to own a gun. It gets worse, and America could be on the verge of developing into a police state.

On Wednesday, September 29, the National School Boards Association wrote President Joe Biden an alarming letter. They alleged that Americans who use their First Amendment rights in opposition to school vaccination, mask mandates, and Critical Race Theory (CRT) are domestic terrorists. While there are undoubtedly passionate moments, expressing frustration or anger at a school board is hardly domestic terrorism.

It’s a disturbing trend that is developing by the Democratic Party. Over the last six months, Biden and Democrats politically weaponized COVID-19. They pitted the unvaccinated against the vaccinated, American against American. Their extreme pressure campaigns to encourage businesses to mandate vaccinations is a loophole around the Constitution. The federal government may not be able to force vaccination and mask mandates, but companies — and schools — certainly can.

Instead of encouraging families to participate in schools, which is their taxpayer right and obligation, Leftists want to control the entire school system, including the curriculum. Through the summer, parents across the country rose up against any form of CRT taught to their children. Schools say there is no set curriculum, but that doesn’t mean teachers aren’t influencing kids through the power of persuasion. During the shutdowns, parents heard what teachers shared with their kids during online classes at home, and their kids began telling them what teachers instructed.

Now, school boards want to suppress parents’ rights to express their unhappiness with school boards and administrators. Worse still, the Department of Justice (DOJ) says it’s ready to intervene in the matter.

Really? If there is a legitimate threat against a local politician during a school board meeting, isn’t it the role of local police to investigate the matter? Whenever the federal government uses its law enforcement powers over citizens, it could have the chilling effect of silencing a large number of people. It may never do a thing, but the threat that it could is enough to repress people and silence many through intimidation.

The hypocrisy is glaring. Where was the FBI last year when rioters destroyed and looted businesses? Where was the FBI while Sen. Rand Paul (R-KY) was threatened on the streets of Washington, DC, in August 2020, after then-President Donald Trump accepted the GOP nomination? Where was the DOJ after illegal immigration activists accosted Sen. Kyrsten Sinema (D-AZ) in the bathroom of Arizona State University on Saturday, October 2?

By Merriam-Webster’s definition of a police state, it sure appears the United States is getting close to being one. Can anyone deny that the government under Democratic leadership is becoming more repressive and is gaining control over American lives as they pick the winners and losers throughout society?

Who is defending Americans standing up for their rights?

It’s not the government.