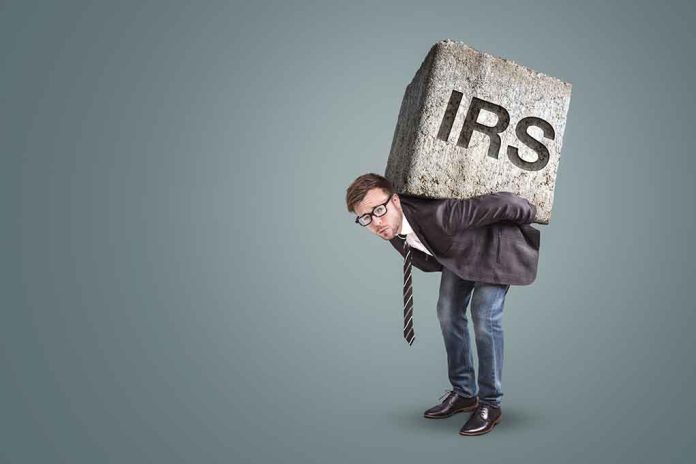 (RightWing.org) – For two centuries, Americans have followed the US Constitution and federal laws and paid their taxes to Uncle Sam. Under the Articles of Confederation, the federal government couldn’t raise taxes to pay its debts for the cost of the Revolutionary War. Instead, it depended on the states to pay it to meet its obligations. To solve that problem, the Constitution included the Taxing Clause of Article I, Section 8. It allows Congress to create and collect taxes to meet the federal government’s obligations.

In 1862, Congress created the first federal agency to collect taxes. It would eventually be named the Internal Revenue Service (IRS). Over time, the IRS became a powerful federal agency in the lives of Americans as it fulfilled its congressional mandate to collect taxes on behalf of the federal government. Now, a new report by Bloomberg Tax says a harsh IRS penalty power is growing. It prohibits citizens from accessing federal courts to correct wrongs committed by the powerful tax agency.

According to the IRS, it assessed $31.4 billion in civil penalties in fiscal year 2020. In 1960, the IRS only had four penalties it could apply to taxpayers. Two of them were divisible penalties, meaning paying the penalty for one transaction allowed taxpayers to sue the IRS for all penalties owed if they were misapplied. So, on March 21, 1960, the US Supreme Court (SCOTUS) ruled that if a taxpayer sought a refund in court, they must first pay the entire tax bill before suing for a refund.

At the time, this wasn’t much of a problem for taxpayers with the means to sue the government. Yet, today, it’s a massive problem. Since 1960, Congress has levied dozens of new penalties. The Flora rule, as the SCOTUS case is known, has shut out many Americans who can’t afford to pay IRS fines on top of their tax bill in full and can’t access the court system for relief.

According to Bloomberg, government watchdog groups and tax experts say the Flora rule is unfair and an equity issue. The system only allows people with the means to pay their bill and then fight it to challenge the IRS, but it locks out those who can’t afford the penalties, let alone the tax bill.

What’s Congress Doing About the Disparity?

In 2019, Congress passed the Taxpayer First Act. The idea behind the law was to make the IRS a more friendly institution for taxpayers and created several new rights. The law requires the IRS to develop customer service plans. It created an Independent Office of Appeals to hear disputes.

The IRS’ internal taxpayer advocate program is recommending to Congress that it repeal the Flora rule in its list of 2022 legislative recommendations to Congress. Still, it’s unknown if Congress will fix the issue as it begins working on the federal budget that’s due by September 30.