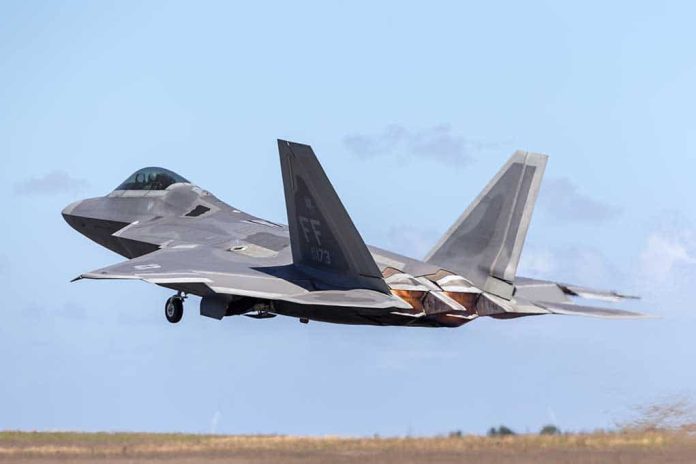 (RightWing.org) – Iran has been “crusin’ for a bruising” for nearly two decades, at least in the metaphorical sense. Former President George W. Bush bundled the rogue nation up with fellow terrorist states Iraq and North Korea during his 2002 State of the Union address, calling them the “Axis of Evil.” In that historical context, it shouldn’t have surprised the Iranian government when a US jet joined forces with allies to fire a warning shot over the country’s bow — so to speak.

On Saturday, October 30, the US Central Command announced an Air Force B-1B variable-sweep, supersonic heavy bomber flew a mission with “several partner nation air forces” in the Central Region and accompanied the mission to maintain a presence.

Fighter jet escorts from Israel, Egypt, Bahrain, and Saudi Arabia flew alongside the Air Force bomber as a show of force to adversaries and a “message of reassurance” to regional allies.

US Central Command head, Gen. Frank McKenzie, spoke out about the mission. “We are stronger together,” he explained. He advocated for building reliable alliances to maintain mission readiness in the face of any contingency.

The five-hour mission originated in the Indian Ocean and spanned from the Gulf of Aden to the Gulf of Oman, crossing over the Red Sea, Suez Canal, and the Strait of Hormuz before departing the region.

Former President Donald Trump may be out of office, but that doesn’t mean American resolve has evaporated. If anything, Republican statesmen have stepped up and applied pressure on the White House to enforce Trump’s “American First” approach to foreign policy. Let’s hope Biden continues to heed that call.