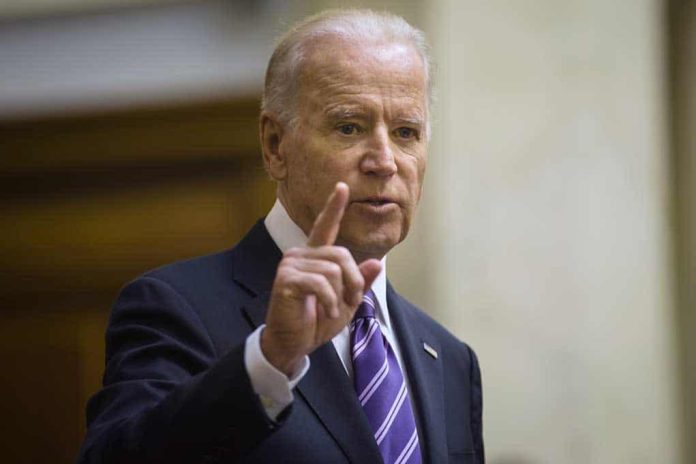 (RightWing.org) – Over the next several months, President Joe Biden could be facing an insurmountable task. As prices rise on gas, food, lumber, homes, and virtually everything else one buys, the president and his economic team try to convince Americans that the spike in prices won’t last long. What happens if he’s wrong? According to a new poll, Biden’s approval numbers are starting to take a hit as Americans wonder the same thing.

The employment situation isn’t nearly as good as the administration or economists hoped it would be. In August, millions of people could lose their homes across the country as eviction moratoriums end. Homeowners are waiting months for appliances and furniture. The cost of travel is exploding.

Compounding the problems, the administration wants to spend trillions more. Massive government spending is likely what triggered the inflationary crisis that is developing in the first place! Economists warned last fall this would happen if the government continued its unprecedented spending. It was predictable and avoidable.

Since governors locked down their states and people had time to watch TV, many likely remember the warnings. In March, Republicans voted against the American Rescue Plan, arguing it wasn’t needed and would overheat the economy. Now, Biden’s approval ratings are starting to take a hit, and it’s primarily tied to people’s economic situations.

While the president and his administration try to convince America that the inflation spike is temporary, only time will tell if that’s true or not. It could determine whether the recent dip in Biden’s approval ratings is temporary and if Democrats are in serious trouble heading into the 2022 midterm elections.

A Monmouth University Poll released on June 16 wasn’t what Democrats were expecting. In April, Biden’s approval rating was 54%. In 2 months, it slid 6 points to 48%. The biggest hit was among independents whose support for the president dropped 11 points from 47% to 36%. Mainly driving the slip is Biden’s position on rising prices as 47% of Americans are “very concerned” about the hit to their wallets.

While Biden is proving incompetent on immigration and crime, it’s the economy that always impacts a president and his party the most when voters head to the polls. If it’s not doing well by the summer of 2022, the Democrats could be in serious trouble.

Here’s why… It’s their base that’s most affected by inflation. There are several issues driving inflation, and they impact the lower and middle classes the most. The Monmouth Poll said that only 19% of Americans benefit from Biden’s policies, and 36% say they don’t benefit at all. As prices go up on items, it reduces purchasing power. It’s like getting a pay cut. While the value of everyone’s dollar decreases, it hurts those closest to the bottom the most.

Biden’s answer is to force businesses to increase wages. Unfortunately, that also drives inflation. That could be a wrong bet as companies pay signing bonuses and increase wages to attract workers. However, these measures come with a cost to consumers. Higher wages mean higher prices to pay for those wages.

So, does a pay increase make things better or worse?

America Is Growing Sour on Democrats in Congress as Well

The president is quickly boxing himself into a corner. As the government tries to solve the problems it creates, it’s another classic example that it’s more disposed to cause turmoil than solving problems. If Republicans play their cards well, show the incompetency of Democrats, and prove that government is not the answer, there is hope they could win with historic numbers in the House and retake the Senate in 2022. The Monmouth poll found that Congress’s rating dropped from 35% in April to 21% in June. Additionally, 57% say America is headed in the wrong direction.

In the end, what every American wants is an opportunity to fulfill their dreams. Suffice it to say, if things don’t change, economists will be rolling out the “Misery Index” soon. If that happens, it’s a serious political problem for Democrats.