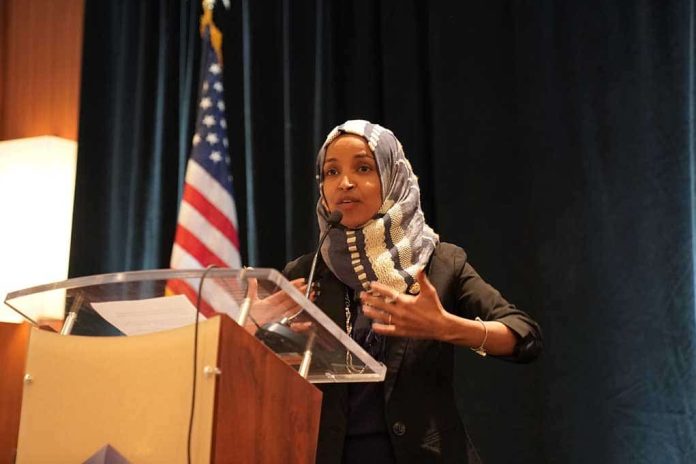 (RightWing.org) – Rep. Ilhan Omar (D-MN) jumped on the Black Lives Matter bandwagon and began pushing to “Defund the Police” in the wake of the death of George Floyd last year. She was one of the most vocal when it came to calling for an end to police department funding. Now, in a stunning display of hypocrisy and contradiction, she’s found a new way to wage war further with law enforcement officials.

As it turned out, defunding police departments wasn’t such a good idea. Minnesota, where Omar’s home district is, experienced a massive rise in violent crime in 2020, including a nearly 17% increase in murders, according to the latest data from the Minnesota Department of Public Safety.

So, being a civic-minded individual, Omar did the right thing, admitted her mistake, and called for renewed funding for the police, right? Nope. Instead, she blamed the police.

Ilhan Omar accuses police of not fulfilling their oath of office and blames them for the rise in violent crime in Minneapolis. pic.twitter.com/3LhuOuXEff

Omar lashed out at law enforcement during a town hall meeting held in Minneapolis on October 23. She blamed two issues for the recent “reduction in policing” and the “lawlessness” plaguing the city.

According to Omar, one of the reasons lay with police officers. She said they have “chosen” to violate their oaths of office. The second problem lay within the Minneapolis Police Department hierarchy. She blasted the department calling it the “most dysfunctional [one] in our state… probably in the [entire] country.”

Omar ended her remarks calling for more “accountability” from the police. Perhaps it’s time for someone to remind her of her past statements.