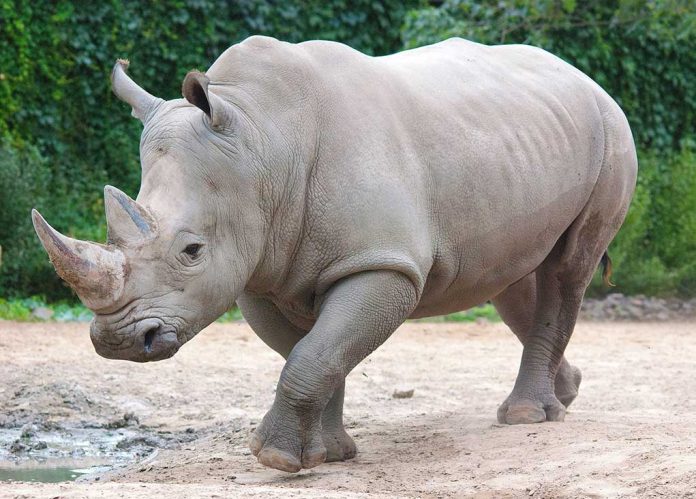 (RightWing.org) – A rhinosaurus is a massive animal. Making one vanish while standing right in front of you is nearly impossible. Yet, President Joe Biden found a way to do just that. It’s been a year since the greatest trick in political history. News broke in the New York Post about Hunter Biden’s laptop that demonstrated the Biden family business’ pay-for-play book that netted the Bidens millions of dollars from foreign sources.

In any given presidential election year, the news of such a monumental nature would have drowned out everything else. It didn’t, and that was by design. A treasure trove of new emails surfaced in recent weeks connecting President Biden to a joint checking account with his son, Hunter. Is this smoking gun too little, too late?

As election day neared, the Biden campaign found a way to make the full-size laptop scandal disappear. They had a lot of help from Twitter, which banned the New York Post story until after the presidential election. The media went out of their way to dismiss the story as a conspiracy theory. Former CIA Director John Brennan and Leon Panetta joined 50 former intelligence officials who insisted Hunter Biden’s laptop was the work of Russian intelligence.

Now, many early deniers who would have done anything to see Trump ousted from office, recognize the laptop issue is legitimate. Isn’t that convenient? Hunter admits he is under investigation for tax fraud and money laundering. But, the most significant news left out of all of it is the “Big Guy,” aka President Joe Biden.

Recent news showing the father and son commingled bank accounts could implicate the Biden family business’ pay-for-play scheme involving Ukraine, Russia, and China. In late October 2020, Hunter’s business associate Anthony Bobulinksi accused Joe Biden of lying about his lack of knowledge regarding what was going on. He detailed meetings with Joe Biden to discuss the business dealings and payments to the then-vice president.

There’s also the story of Hunter flying with his father aboard Air Force 2 to China, where the younger Biden walked away with millions of dollars in new business. In 2015, the State Department warned of possible conflicts of interests regarding Hunter’s business activities during the Obama administration. Now, there are recent rumblings about the joint checking account.

Where Is the DOJ?

How could the Department of Justice (DOJ) not see it if a simple person can add up all the accounts of potentially serious misdoings? The FBI supposedly has the laptop in their possession. If so, the agency knows much more than we do about Joe and Hunter’s misdealings.

Influence peddling for massive amounts of money is commonplace in Washington, DC. In many instances, it’s legal, and other times it isn’t. The DOJ is accusing former Trump attorney and New York City Mayor Rudy Giuliani of the same potential crimes of Joe and Hunter Biden. The Justice Department alleges that Giuliani secured profitable contracts in foreign countries if he could give them access to former President Donald Trump or other leading US government officials.

The media was ecstatic over Giuliani’s arrest, yet they are quiet about Biden’s situation. Between the media and the DOJ, someone lost Biden’s rhino. It just disappeared. Virtually no other American could get away with it. This is what happens when the media is partisan and the deep state is in control. They will always protect their own.

Isn’t this the definition of corruption?