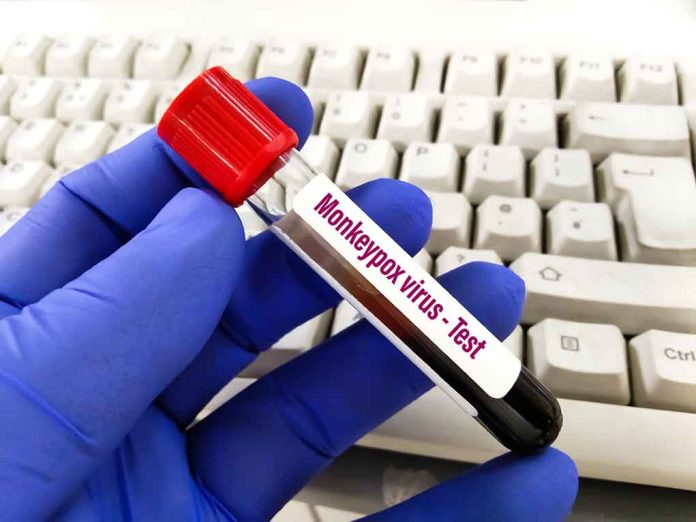 How Dangerous Is Monkeypox?

(RightWing.org) – Monkeypox is a rare disease first discovered in 1958 when multiple outbreaks of the disease swept through colonies of monkeys used for research. The CDC recently reported that a Massachusetts resident tested positive for the condition after returning from a trip to Canada on May 18 and a second case has been confirmed in New York.

As of May 23, Global.health reported that 18 countries have reported cases of monkeypox infection in humans since May 13. The WHO stated most, but not all, cases involved men who recently engaged in homosexual relations.

The WHO has started to report data on the monkeypox outbreak: https://t.co/e3Q23sllvX pic.twitter.com/3WKqj79eLy

The UK reported the highest number of cases at 71, with Spain and Portugal reporting the next highest at 41 and 37 confirmed monkeypox infections respectively.

The WHO described two stages of infection with monkeypox. The first one lasts roughly five days, with patients experiencing headaches, muscle aches, high fever, and lymph node swelling. In the second phase, individuals form rashes similar to those experienced with chickenpox. The lesions typically fall off after two to four weeks.

The European Centre for Disease Prevention and Control issued a statement on May 23 advising the risks for an outbreak remain low and medical officials have reported most recent cases were mild. According to the ECDC, monkeypox treatment focuses primarily on managing symptoms and preventing secondary bacterial infections. British officials are advising patients to isolate themselves for three weeks.

Monkeypox contacts advised to isolate for 21 days in UK https://t.co/mikx9RAVAD

The Danish pharmaceutical company Bavarian Nordic A/S is the only manufacturer of an approved monkeypox vaccine. According to National File, the company recently confirmed the US purchased $119M to purchase its Jynneos vaccine and could exercise a multi-million dollar option for more.