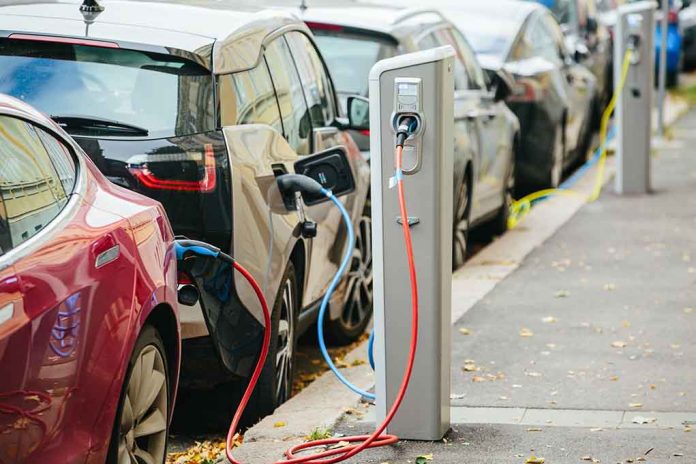 (RightWing.org) – Are environmentalist activist and their friends in Congress moving too quickly to force America onto green energy? Across the country, energy grids are struggling to keep up with current demand. In Texas alone, the state’s energy distribution company (ERCOT) is asking residents to be mindful of their energy usage to avoid rolling blackouts, which have become more common in recent years. The question is, can renewable energy replace fossil fuels?

Whether it can or not, auto manufacturers are moving quickly to transition cars off of gasoline and onto battery power. Still, the amount of electricity to charge millions of cars is phenomenal, and the growth in electric vehicle usage could present a unique challenge to each state’s grid.

Could Electric Cars Crash the Grid?

While electric cars are still in their early stages of development, they are expensive and inefficient for prolonged road use. That could change in the not-so-distant future. Yet, for now, gas-powered vehicles are the overwhelming majority on the road. Nonetheless, planners say there needs to be careful consideration and planning as the federal government and states barrel roll towards renewable energies and battery-powered vehicles.

Nationwide, the US Energy Information Administration says the total battery storage used for grid service is around 4,605 megawatts. Yet, the country consumes over 400,000 megawatts of electricity every day. One analysis shows that in Texas alone, just 60,000 cars simultaneously charging could threaten the state’s power grid. That many cars charging at once would use 70 gigawatts of electricity. Analysts say that’s the total amount of power Texas generates during peak hours for the entire state.

While 60,000 cars might sound like a lot, it pales compared to how many vehicles are registered in Texas. The Texas Department of Motor Vehicles says it registers 24 million vehicles annually. Therein lies the challenge.

In California, the issue is significant but different. Officials don’t appear to be worried about overall power capacity. Instead, they struggle to meet the current energy demands during peak electric usage hours. The Golden State expects electric cars to consume 5.4% of the state’s electricity by 2030.

Still, it’s not the same for every state. In Wyoming, America’s least populated state, electricity production would need to increase 17% if every car went electric. Maine’s grid would need to add an additional 55% in electric generation.

Planners Say There May Not Be Cause For Concern

Analysts say electric car management will be the issue, not necessarily increasing power to the grid. When people sleep at night, there is an excess supply of electricity. Couple that with an increase in solar home usage during the day, and it might make electric vehicle charging needs manageable.

Still, planners say that smart charging technology may also play a vital role in grid management. The system will not allow an electric vehicle to charge unless the electric demand in the grid can support it. Of course, that could cause other problems for drivers if their cars are low on juice.

Perhaps one innovation could help. There’s talk of allowing car batteries to serve as an energy storage device for the grid. By returning power to the grid from the battery while it’s not in use, the cars could recharge when demand drops. That could be a viable solution for school buses and utility vehicles not used at night or on the weekends.

Right now, power grids can’t handle a massive surge of electric vehicles. Still, future technologies could change how America travels, and both regulators and vehicle manufacturers appear intent on innovating America into the next area of transportation.