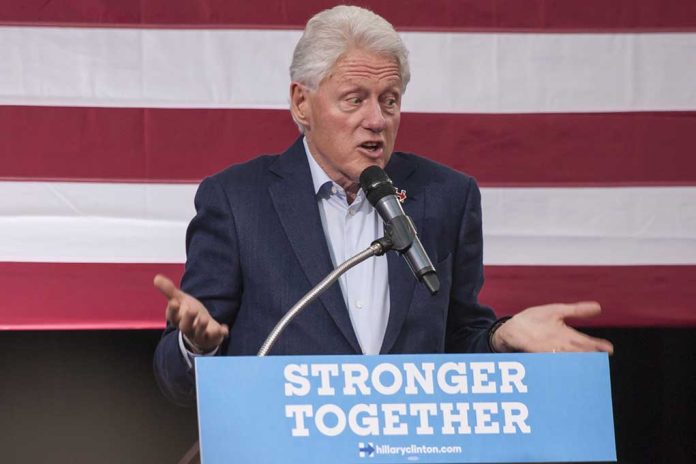 (RightWing.org) – Jeffrey Epstein sidekick Ghislaine Maxwell has come up with a new strategy to cut her prison sentence. She’s trying to impress the court with her charitable works. The only problem is the charity she worked for was run by the Clintons.

EXCLUSIVE: Ghislaine Maxwell touted her connection to Bill Clinton and how she helped launch his Global Initiative to prove her 'desire to do good in the world,' as she seeks a lower sentence for trafficking underage girls for Jeffrey Epstein https://t.co/i3qBkKN6Wq

In a 77-page legal filing, Maxwell — who’s facing up to 50 years in jail for trafficking teenage girls — argued that her charitable work with the Clinton Global Initiative shows her “desire to do good in the world” and justifies a much lower sentence. Maxwell is due to be sentenced on June 28, and she’s asking for a sentence of just four years and three months in prison.

The filing points out that Maxwell has supported a variety of nonprofits and charities, as well as qualifying as an emergency medical technician (EMT) and working with the Cleveland Clinic to set up a telemedicine platform. It also claims she’s currently assisting fellow inmates at New York’s Metropolitan Detention Center, where she’s currently jailed.

Maxwell has been convicted of serious crimes, and at this point arguing for a lighter sentence based on her charitable work is one of the few options she has left. On the other hand, there’s already a lot of speculation about the Clintons’ own links with Epstein — the financier visited the White House 17 times during Bill Clinton’s presidency — and highlighting her links with the former president might not be the best move. Will it help or hurt her case? The court will decide that on Tuesday.