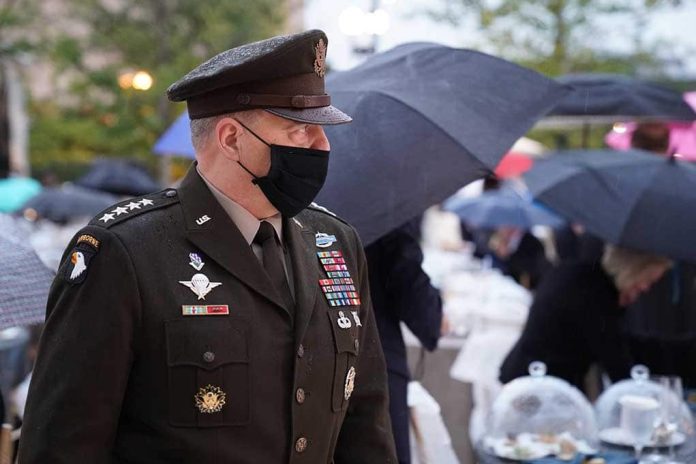 (RightWing.org) – On Tuesday, September 14, allegations broke out that Chairman of the Joint Chiefs of Staff, Gen. Mark Milley, potentially violated the oath of his office and committed treason against the United States of America. On Wednesday and Thursday, congressional leaders expressed concern and outrage over the allegations leveled by famed journalist Bob Woodward, who broke the news in an excerpt of his upcoming book, Peril. On Friday morning, Milley finally spoke out and defended his actions.

When the founders ratified the Constitution in 1787, they purposely created the military to be under civilian control. Military leaders are responsible to the President of the United States, and only the president as the commander in chief. Congress has zero control or operational authority over the military according to Article 2, Section 2 of the US Constitution. If the allegations against Milley are true, the general subverted former President Donald Trump’s constitutional authority.

Milley Acknowledges the Call to Chinese

On Friday morning, Gen. Milley said his calls with the Chinese in the final days of Trump’s presidency were “perfectly within the duties and responsibilities” of his position. He added that the calls were “routine” and meant to assure the Chinese that the US government was stable.

Let’s break this down for a moment because there may be a problem with Milley’s statement.

First, the military doesn’t make foreign policy. It fulfills the lawful orders of a president. At no time did former President Trump say, intimate, or suggest he would arbitrarily attack another country. In fact, he’s the first president in decades who didn’t initiate a significant military operation against a foreign power.

Second, there’s a reason the State Department exists. It’s the job of the Secretary of State to initiate communications with foreign governments, not the chairman of the joint chiefs of staff. According to then-acting Secretary of Defense Chris Miller and President Trump, they were unaware of Milley’s conversation with his Chinese counterpart and didn’t authorize the calls.

Finally, Milley didn’t address the remaining allegations against him. Instead, the chairman said he would discuss Congress’ concerns thoroughly in the coming weeks. On September 28, a public hearing is scheduled before the Senate Armed Services Committee to discuss the Afghanistan withdrawal. Senators may put that issue on the back burner in light of the new revelations.

Milley Ignores the Elephant in the Room

While the general’s phone calls are highly questionable, Milley didn’t address his backdoor conversations with House Speaker Nancy Pelosi (D-CA) and Senate Majority Leader Chuck Schumer (D-NY). Neither of the congressional leaders is within the general’s chain of command. Perhaps just as telling, the chairman didn’t offer any perspective on the allegation that he swore senior military officers an oath to himself over President Trump. Some suggest the latter action was a potential coup.

If these allegations are true, it’s unquestionably a violation of the Unified Military Code of Justice (UCMJ) and federal law. At a minimum, the general betrayed the trust of those he leads. At most, he could face a court-martial and significant consequences. For now, President Joe Biden is standing in front of his lead general. We’ll see if that lasts.

In the coming days and weeks ahead, there could be many twists and turns to this story.