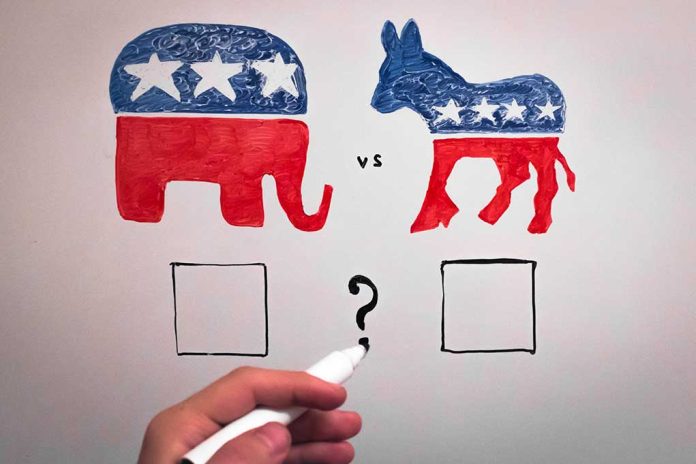 This New “Third Party” Is About To Be Launched

(RightWing.org) – Since John Adams and Thomas Jefferson teed up and went to battle in the election of 1800, the two-party system has dominated the American political scene. In his farewell address to the nation, George Washington wrote that political parties were dangerous as people would become beholden to party over country. Many believe he was right.

Still, parties exist as a natural course of politics. People rally around big ideas, and to win a presidential election, a candidate only needs a plurality of electoral votes to claim the White House. History has not been kind to third parties, but they have sometimes played a significant role in electoral politics. Now, a group of former Democrats and Republicans are forming another party to take on the big boys.

Will they be successful?

On Wednesday, July 27, Reuters reported that dozens of former officials from the nation’s two dominant political parties announced the formation of a third national party. Currently, there are three other political parties in the US. The Libertarian, Green, and Constitution Parties are not present in all 50 states, and their numbers are not large enough to compete with Democrats and Republicans.

Leaders of the new party, which has been named Forward, plan to alter the course of political history in America. Former Democratic presidential candidate Andrew Yang and former Republican New Jersey Gov. Christine Todd Whitman will co-chair the new organization. The founders say that political polarization and gridlock necessitate another political party to unjam the system.

Dozens of officials in the Reagan, George H.W. Bush, George W. Bush, and Trump administrations are also involved in forming the new alliance. The party platform says it desires to “reinvigorate a fair, flourishing economy,” provide more options for voters and instill voter confidence in government as more people have a say in the country’s future direction. While it hasn’t established specified policy proposals, it will soon.

The idea is that there shouldn’t be a Left or a Right, just Forward.

Will a Third Party Survive?

According to a recent Suffolk University-USA TODAY poll, 69% of independent voters say they want more than two options on the ballot. Additionally, 79% of those between 18 and 35 years of age want a third party. Some say the polls prove Americans are desirous of another major national party.

Director of presidential studies at the University of Virginia’s Miller Center Barbara Perry said the US electoral system is a winner take all format, noting that it discourages a more than two choices. History might suggest her point spot on.

Since 1920, only four third-party presidential candidates earned a single Electoral College vote. Still, a third-party candidate heavily influenced a presidential election on a few occasions. In 1912, Theodore Roosevelt broke away from the Republican Party to form the “Bull Moose Party.” A two-term former president, he earned 27% of the vote and split it with the GOP incumbent President William Howard Taft. That thrust Democrat Woodrow Wilson into office.

No other third-party candidate since then has earned anywhere close to the votes of Roosevelt.

So, will Forward survive? Political analysts are skeptical it will work. Still, its founders hope to buck history, and only time will tell.