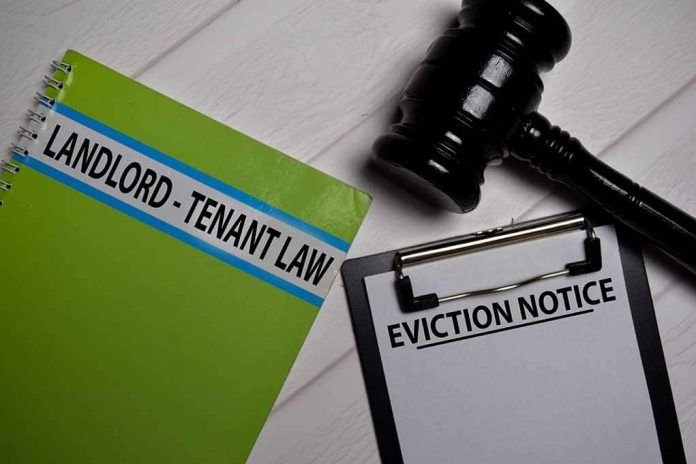 (RightWing.org) – America could be seeing the light at the end of the tunnel as the COVID-19 pandemic begins to wane. However, that only means Americans will begin to experience the fallout of the overreach by federal, state, and local officials in the months and years to come.

One such domino fell over on Thursday, February 25. US District Judge John Barker ruled that the CDC did not have the constitutional authority to halt evictions during the COVID-19 pandemic. He wrote that while the “pandemic exists, so does the Constitution.”

The ruling was in response to an October 2020 federal lawsuit filed against the CDC by a group of landlords and property managers in Texas.

Consequences of the Eviction Moratorium

The CDC’s order from September 2020 made it a crime for landlords to evict tenants who couldn’t afford to pay their rent and didn’t have an alternative for affordable housing. The order was later codified in law by Congress, and President Joe Biden extended it until March 31, 2021. The CDC argued that the moratorium’s purpose was to limit the spread of COVID-19 by keeping people housed during the pandemic.

While the government’s order may have been in good faith, it came with real and lasting consequences. Small landlords were crushed by the lack of income. In some instances, the money they lost may never be recovered. Yet, they were still required to pay their mortgages, property insurance, and keep up with maintenance issues without any relief in sight from the CARES acts.

What’s in the Ruling?

In the 21-page ruling, Judge Barker said Congress didn’t have the constitutional authority to halt evictions nationwide. He added that the CDC threatened the rights of landlords under Texas state law. Barker said the real question was whether the federal government could regulate commerce among the states under the US Constitution’s Commerce Clause.

Never in American history has the federal government invoked national powers to violate individual property rights across state lines. The heart of the ruling deals with the founding principles that property ownership is sacred and that the government has no right to infringe upon property owner’s rights improperly.

Barker said he expects the CDC to respect the ruling and withdraw its eviction moratorium. It’s unknown for the moment what the fallout of the ruling will be. However, the Department of Justice is likely to appeal the case quickly.