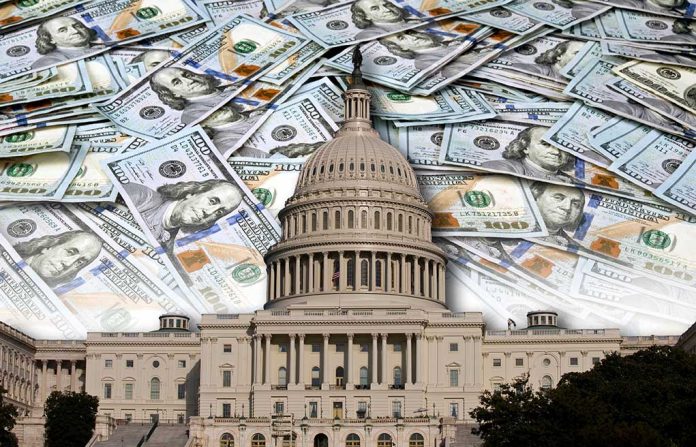 (RightWing.org) – In 2020, the US federal government added over $4 trillion in new debt. By the week of Monday, March 8, the government may be adding nearly $2 trillion more for another COVID-19 relief package. Off its heels, there are proposals for an infrastructure package that could be another $4 trillion or more. All of the debt and spending are causing concern for some economists, who suggest this government spending level could spark inflation and significantly hurt Americans recovering from COVID-19.

Currently, America has around $30 trillion in debt.

So, let’s get an idea of what $30 trillion looks like. It’s an incredible amount of money that is difficult to imagine the number it’s so large. If $100 bills were stacked on top of one another, $1 million is approximately three feet in height. A billion dollars is approximately one mile up in the air.

Okay, but what about $1 trillion? That would take you into space and just beyond the International Space Station at 631 miles above the Earth’s surface. Now, do that 29 more times.

That’s a lot of money!

So, who owns the rest?

The federal government creates much of the debt through trust funds, revolving funds, and some special funds through what’s known as “intragovernmental debt.” Some agencies or funds (such as the Social Security Trust Fund) bring in more cash revenues than they spend. That money is loaned to the US Treasury through a transfer, and it immediately goes into the government’s general fund, where it’s spent. An IOU is credited to the originating agency. In essence, the government owes itself a lot of money.

Is Inflation a Serious Risk to Hard Working Americans?

As President Biden hopes to sign the $1.9 trillion COVID relief package, some economists, such as former Treasury Secretary Larry Summers and former International Monetary Fund Chief Economist Oliver Blanchard, are warning of the risk to Americans. They say the inflationary risks are real and that Congress is spending too much haphazardly.

The concern is that too many people who don’t need the stimulus are either saving their stimulus money or paying debt with it (which is a form of savings). Once the economy reopens, economists fear the pent-up savings could drive demand so high for products and services that the supply won’t meet the demand. In that case, the prices of virtually everything rises faster than economic growth. That’s known as inflation.

If that happens, the Federal Reserve could be forced to start raising interest rates. That will make getting a mortgage, buying a car, or using a credit card more expensive. Long-term, people may pull back their spending as prices rise to unmanageable levels, impacting the job market.

In simple terms, unnecessary government spending can cause significant harm to the US economy and the people who depend on it.

Spending money today sounds good until one realizes the cost that comes with it. Oh… some in Congress want to add tens of trillions in more debt to pay for the Green New Deal, (supposedly) free college, college loan reduction, and more. Just remember, free isn’t free.

We all pay for it somewhere.