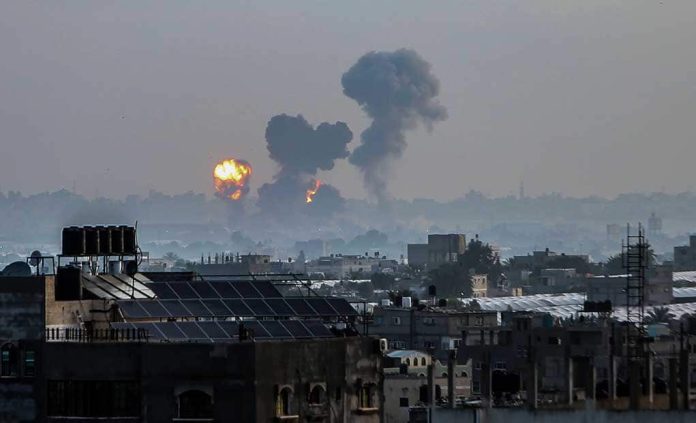 (RightWing.org) – Typically, right or wrong, Republicans are seen as hawks and Democrats as doves. However, President Joe Biden has put a new spin on things. He’s even managed to lurch so far off the usual Leftist course that he’s raising alarms among Democrats if you can imagine that!

On July 21 and 23, the United States launched drone airstrikes against alleged al Qaeda affiliates in Somalia — without authorization from Congress. Now, top-ranking Democrats are flipping out over President Joe Biden’s decision.

The administration justified the strikes using an outdated Authorization for the Use of Military Force (AUMF) dating back to the initial effort to hunt down the terrorists who launched the September 11 attacks nearly 20 years ago.

Moderate Dems are calling for a reevaluation of the 2001 AUMF after the Biden admin invoked it this month to justify multiple bombings in Somalia https://t.co/M5XBoH0mfu

Sen. Tim Kaine (D-VA) lashed out at the Biden administration, stating he had seen no actionable excuse for carrying out the strikes. According to him, there was a complete lack of any indication the attacks were “necessary to protect any US personnel.” Senators Mike Lee (D-UT), Bernie Sanders (I-VT), and Chris Murphy (D-CT) expressed similar concerns regarding the absence of a credible threat to American forces.

“We’re troubled that no one in the administration sought the required legal authorization from Congress for Tuesday’s drone strike in Somalia especially with no American forces at risk…” pic.twitter.com/5idX7h9wPT

Continuing, he said if there was a reason for the strikes, now was the time for the administration to confess and let lawmakers know.

Democrats and Republicans alike have pushed to revoke the outdated AUMF, and with Democrats this fired up over Somalia, now might be the perfect time to achieve that goal finally.