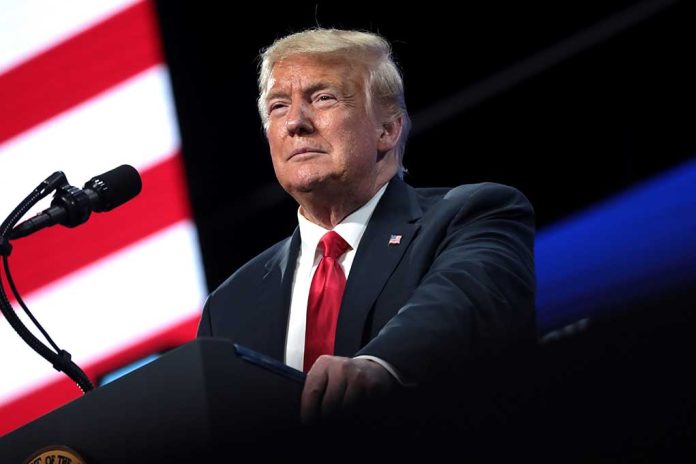 (RightWing.org) – Former President Donald Trump spoke in church on Sunday, and he had a powerful message for the nation.

On December 19, Trump visited Dallas to hold the final event on his “History” tour with Bill O’Reilly. That morning he accepted an invitation from Pastor Robert Jeffress to speak at the city’s First Baptist Church.

Pastor Jeffress introduced Trump as one of his closest friends and praised him as “a great friend to Christians everywhere.” He also commended Trump on his pro-life and pro-Israel policies.

“Let us thank Almighty God for our nation, for our freedoms, and the gift of God’s everlasting mercy and grace.” – President Donald J. Trump pic.twitter.com/VRlyj6PvJv

Addressing a congregation of around 3,000 people, Trump said he was abandoning his prepared speech to speak from the heart. He went on to say, “There’s a lot of clouds hanging over our country right now – dark clouds,” before saying America needs a savior, and “we have a savior — that’s not me, that’s someone much higher up.”

With the economy in trouble, our foreign policy in disarray and COVID-19 still running wild, Trump’s words were well-timed. Liberals are pushing for even more restrictions on our liberty even though the majority of Americans are now vaccinated. The administration refuses to deal with immigration and undermines our security by removing sanctions against Iran and Russia.

Trump’s words were a timely reminder the Democrats aren’t, ultimately, the ones running the show.