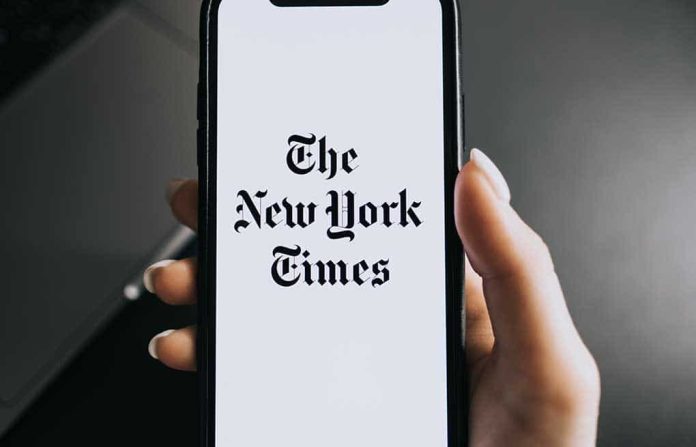 (RightWing.org) – Over the last four years, the New York Times lost much credibility over its coverage of former President Donald Trump and the conservatives who supported him. Impartial coverage is nearly impossible when journalists and editors with blatant partisan views and ideology believe narratives are more important than facts. Now that the former president is no longer in office to attack, the Times released a controversial story involving a highly influential rising star in conservative circles.

On Tuesday, March 30, the New York Times published an expose on Rep. Matt Gaetz (R-FL). The paper alleged that a year ago, the Department of Justice (DOJ) opened an investigation into the conservative, questioning if he had a sexual relationship with a 17-year-old minor. However, According to a highly respected Constitutional law professor at George Washington University, the substance of the article is low on facts and high on speculation.

On Wednesday, the scandal erupted as the New York Times and Gaetz offered two different views of a one-year-old investigation that should have been easily established a long time ago. The allegation is pretty straightforward: Gaetz, a single man, allegedly dated a 17-year-old minor and traveled across state lines for sex. The Florida Representative denies the allegation vehemently.

As law professor Jonathan Turley pointed out, the girl was either 17 or she wasn’t. Gaetz traveled with her, or he didn’t. Why would it take a year to establish if that was true or not?

Then there’s this… Gaetz recently said his attorney was in communications with the DOJ. The representative said he was told he was a subject in an investigation involving women after notifying the Justice Department that he and his father were being extorted for $25 million just before the New York Times article broke. The Florida Republican said a call was recorded and that his father wore a wiretap at the request of the FBI, substantiating his claim. According to Turley, if the DOJ was behind the call, it is unlikely it will release a transcript or the call’s audio.

Someone’s Not Telling the Truth

Both are serious charges. However, the first is over a year old and is straightforward. So, why the leak now, and why didn’t the Times dig deeper into the leaked allegations and ask more questions? It shouldn’t be hard for an institution such as the New York Times to verify a birth date. Instead, the Times ran a story that was more smear and less fact. Plus, journalists never contacted Gaetz and didn’t learn of the extortion conspiracy theory before publishing the article. There are far more questions to be asked than there are answers in the article.

In a recent Fox News interview, Turley asked, “what’s really being investigated by the DOJ?” The Times says it’s about an underage minor. Gaetz says it’s about extortion. If the Times is correct, Gaetz’s political career is over. If Gaetz is right, the New York Times has some serious questions to answer.

Stay tuned. This could become an evolving story.