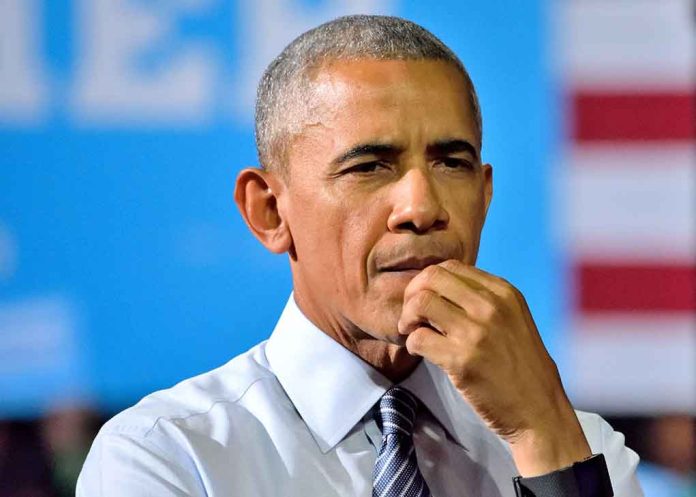 (RightWing.org) – Over the last year, President Joe Biden has caused several self-inflicted wounds to his approval ratings and harmed congressional Democrats in the upcoming November midterm elections. Biden’s poll numbers are between 39% and 45% approval, depending on the poll. RealClearPolitics average of polls says he has an abysmal 41.5% approval and 53.5% disapproval rating.

On Tuesday, April 5, President Biden invited former President Barack Obama to the White House to celebrate the 12th anniversary of Obamacare. For numerous reasons, the former president’s signature policy got overshadowed by the difficulties of current issues and Obama’s dynamic presence over that of Biden’s. Not only did Obama unintentionally upstage Biden on Tuesday, but on Wednesday, he might also have complimented Donald Trump. In the world of Democratic politics, that’s as bad as it gets.

On Wednesday, Obama spoke at an event hosted by the University of Chicago’s Institute of Politics and The Atlantic. The former president talked briefly about the Russian war against Ukraine. Obama said he didn’t know if Russian President Vladimir Putin was the same man today that he dealt with from 2009 through 2016. Obama added that five years ago, he would not have predicted what Putin is doing in Ukraine today.

So, was that just a statement of fact or could it be construed as a compliment towards former President Donald Trump? Trump’s presidency sat sandwiched between Obama and Biden. Under both Democratic presidents, Putin enacted his will against Ukraine. Under Trump, Putin remained relatively quiet on the world stage. There were no invasions, hostilities, or outbursts from Russia despite untrue Democratic allegations that Russia intervened in the 2016 election by colluding with the Trump campaign.

So, did Obama imply that Trump kept Putin in line and that Biden has not?

Obama’s Leadership Was Challenged by Putin as Well

In the 2012 presidential election, GOP nominee Mitt Romney warned in a presidential debate with Obama that Russia was the most significant geopolitical threat to the United States. Obama mocked him mercilessly and said Romney was still living in a Cold War mentality. It turned out that Romney was right.

Under Obama’s leadership, Russia invaded Crimea (which was part of Ukraine) and annexed it in 2014. On Wednesday, the former president said he didn’t get much willing help from the international community. Perhaps they took his words to heart that Putin was a significant threat? Either way, Obama said he had to drag world leaders kicking and screaming to get them to take appropriate action.

Obama noted that he was encouraged by the international response to Ukraine over the last few months.

The real question is, would Putin have invaded Ukraine if Trump were still president? We’ll never know. Still, though perhaps not intended, it appeared that Obama gave Trump a left-handed compliment.

You won’t hear that one in the liberal media.