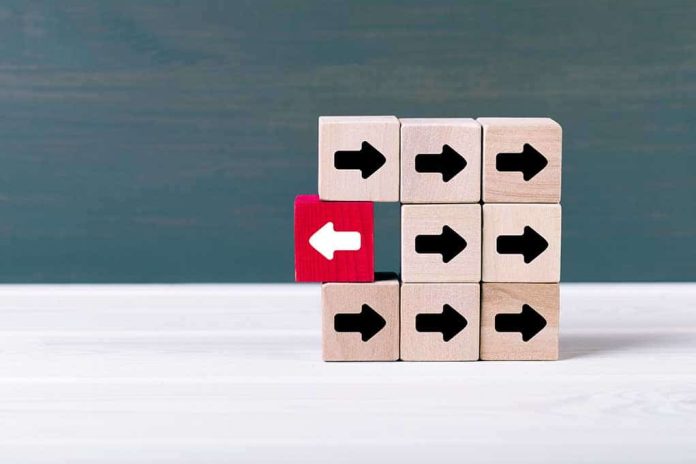 (RightWing.org) – When the framers ratified the US Constitution in 1787, they created the greatest form of government ever known to humankind. Through its proven system of checks and balances, it’s very difficult for any one person to gain control of the US government. Of course, they didn’t account for the rise and influence of political parties.

Fast forward to 2021 and America is at another crossroads, which is not unprecedented. However, this time it could alter America’s future so detrimentally that it could render the concept of checks and balances obsolete, or something far worse. On numerous occasions, West Virginia Democratic Senator Joe Manchin (D-WV) said he would fight to protect one critical check and balance. On Sunday, April 25, he reaffirmed that commitment and all but declared war on the far-left.

Left Craves All Out Power

The far-left is making no bones about it. They want the power to enact their extreme radical agenda. Through at least 2022, the only thing standing in their way is the Senate filibuster. Normally, Democrats stick together like bees on honey. It’s a rare instance when even a moderate Democrat breaks away from the party.

This leaves Conservatives forced to put their hopes in Manchin’s firm stance against removing the filibuster. It’s a dangerous position. While Manchin appears to be a reasonable guy, he’s still a Democrat. Unfortunately, there aren’t a lot of choices to hold the left at bay. In the end, Manchin is a moderate Democrat in a deep red state. He may not have many choices if he wants to remain in office when his term is up in 2024.

Manchin Takes on the Left

Since late 2020, Manchin was vocal he would not vote to end the Senate filibuster that requires 60 votes to pass legislation. The most current brouhaha is over the widely expensive $2.3 trillion infrastructure proposal by President Biden that is more social engineering than rebuilding America. The GOP recently submitted its much less costly counterproposal. Manchin made it clear he will not support railroading the minority party and will force bipartisanship whether the far-left of the Democratic Party likes it or not.

In an evenly divided Senate, Democrats also don’t have a lot of choices. However, the Left of the party is on Manchin like flies on a whoopie pie. Especially from the House, where Democrats can easily pass legislation that can’t pass in the Senate. The frustration recently boiled over when number three House Rep. James Clyburn (D-SC) said he was insulted that Manchin often aligns with the minority party in the Senate over “minority voters in America.” Some are now calling Manchin the “roadblock.”

In an op-ed in early April, Manchin said he would not vote to end the filibuster under any circumstance. He called for more bipartisanship and an end to the craziness in Washington, DC. On Sunday morning, April 25, he told CNN once again that he would not blow up the Senate. In doing so, he’s inviting the wrath of the Left.

It will be interesting to watch how the Left reacts. If Manchin maintains this posture, much of their agenda will be forced to wait and see if they can gain seats in either chamber. However, that’s unlikely as the GOP builds momentum for 2022 in light of the hard Left push.

He won’t if he cherishes his political career in West Virginia.