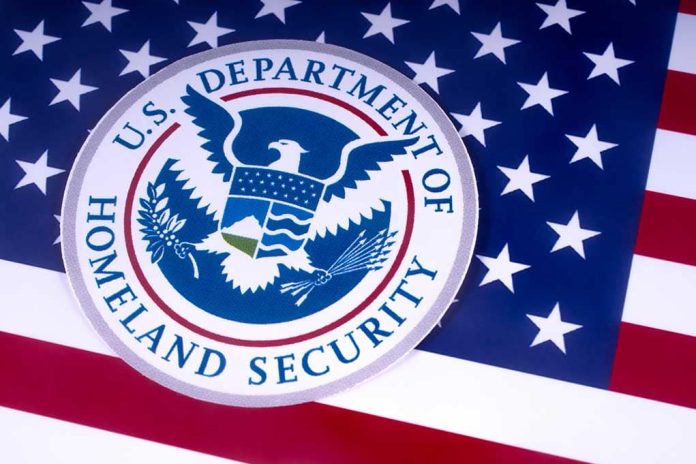 (RightWing.org) – During the 2016 presidential election, immigration was one of the core platform issues that got Donald Trump elected as the 45th President of the United States. On the campaign trail, he repeatedly talked with victims of violent crimes by illegal immigrants that Democrats refused to deport. Instead, at times, they treated the criminal illegal immigrants like the ones who suffered.

On Wednesday, March 17, Department of Homeland Security (DHS) Secretary Alejandro Mayorkas remained defiant during a tense House Committee on Homeland Security hearing. Mayorkas refused to acknowledge that a crisis was emerging as migrants flooded the border in February. However, in recent days, the situation got so out of control that the administration called in the Federal Emergency Management Agency (FEMA) to help with logistics after the administration reopened several child detention facilities.

Again, Democrats are testing the limits of the US Constitution. There are laws on the books that President Biden is refusing to enforce. Yet, his job is to “faithfully execute” the laws that Congress passes.

It’s 2021, and it feels like deja vu. According to the Wall Street Journal, the number of migrants breaching the border is near a 20 year-high in just two months since Biden took office. Last week, it was reported that illegal immigrants were being released freely into the country, even though they tested positive with COVID-19. There were a lot of questions by Republicans during the hearing. However, Mayorkas wasn’t answering them.

That led to numerous tense moments even as the secretary admitted the country is likely to face the largest number of illegal immigrants in two decades. In response, the GOP criticized Biden for ending many of former President Trump’s policies that were working and returning to Obama-era immigration rules that were the catalysts for the explosive number of people entering the country at the southern border illegally.

In February alone, Border Patrol agents arrested 97,000 migrants crossing the border. Who knows how many actually got through without getting caught.

The hearing was generally tense. However, two instances of Mayorka’s defiance stand out, and they are revealing. In one instance, Rep. Michael McCaul (R-TX) stated that the administration was sending the wrong message and pushed Mayorkas to acknowledge the crisis.

Instead, the secretary said the real crisis was when the nation ripped “a nine-year-old child out of the hands of his or her parents and separated that family to deter future migration.” It was a swipe at Trump. However, as Democrats often do, he failed to remember it was Obama who created, implemented, and executed those policies that the Trump administration carried forward and ultimately ended in 2019.

The second came when Rep. Kat Cammack (R-FL) shared that one month before her high school graduation in 2006, a classmate was kidnapped by an illegal who was deported multiple times. She alleged that it’s the same policies then that now empower illegal immigrants to behave criminally without consequences.

Mayorkas defended the criminal by saying Cammack’s statement was “disrespectful.” However, the Florida congresswoman wasn’t having it. She fired back, “I’m sure the American people feel very disrespected about the border situation they’re facing right now.”

It’s more of the same condescension from Democrats who believe that they must protect their failed policies at all costs. Even when it’s obvious that things were under control during Trump’s presidency, they can’t help but claim the border crisis is his fault.

The name of the game for Democrats is to deflect, blame, and accuse. No one is better at it. However, it didn’t work for them in 2016, and it may backfire significantly for Biden and Congress moving forward.

Democrats continue to prove one thing – they’ll defend their failed policies until the very end.