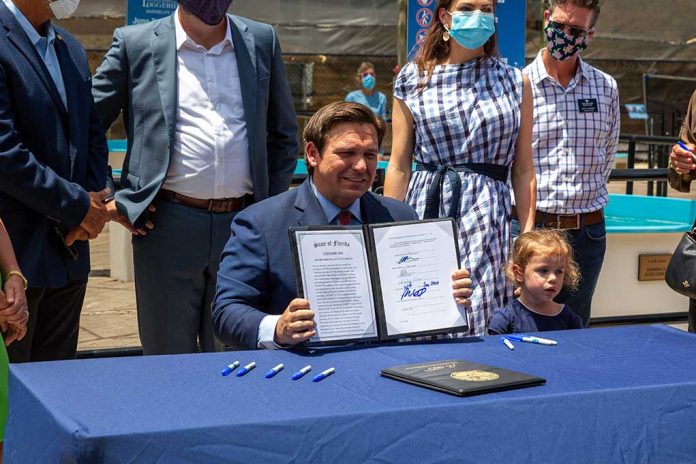 (RightWing.org) – Over the last 50 years, only one president waxed Democrats poetically. President Ronald Reagan was a master of conservative politics. He spent decades contrasting the destructive policies of liberalism and big government with the principles of America’s founding documents. Reagan won a landslide election in 1980, and in 1984 won 49 out of 50 states. America inherently understands good from bad when properly contrasted and purposely lived.

On Thursday, February 24, conservative activists descended on Orlando, Florida, for the annual Conservative Political Action Conference (CPAC). Former President Donald Trump will speak later in the weekend-long event. However, Florida Gov. Ron DeSantis (R) stole the show on Thursday. He did something that few if any, Republicans have done since Reagan – he electrified the conservative base and showed that he may be a serious conservative Republican candidate for president in 2024.

In 2016, Donald Trump won the White House, but it wasn’t necessarily because of his conservative record. In fact, he had to earn that reputation. As a New Yorker and a former Democrat, many questioned if Trump was truly a Conservative. While he governed exceptionally well as a right-wing president, Trump isn’t necessarily the guy who can wax poetically about conservative policies despite his stellar record.

That’s where Gov. DeSantis separates himself in Republican circles. Not only does he have the conservative credentials from his experience as a highly influential governor who pushed back on President Joe Biden’s COVID policies, but he also has a complete understanding of conservatism and what it is and is not.

On Thursday, the Florida governor offered plenty of red meat. He railed on wokeism and warned that if Democrats get their way, Republicans will become second-class citizens. He said their goal is to marginalize half of the country, leave voters powerless, and strip conservative voices from the public conversation. He declared that Florida defeated the far-Left and Faucism, and that freedom prevailed in his state.

Over the last year, DeSantis enacted strong anti-riot laws, replaced three liberal state Supreme Court justices with conservatives, and banned sanctuary cities. The audience applauded him for banning Critical Race Theory and replacing it with civics and fighting illegal immigration by sending immigrants flown into his state by the federal government to Delaware.

While all that’s good stuff – that’s not what got the CPAC crowd going.

Towards the end of the speech, DeSantis quoted former President Dwight Eisenhower when the former president warned about the dangers of turning government policy over to scientific and technological elites. Taking a swipe at Democratic governors and President Biden, DeSantis paraphrased Eisenhower and stated that statesmen don’t subcontract policy to help bureaucrats. He said a statesman’s job is to lead, consider all the interests in society, and govern for the public good.

DeSantis didn’t focus on tax rates at the expense of cultural issues. Instead, he said that Florida is an example of sound tax policy and that the state has always had low taxes. Which is why so many people are leaving leftist states for Florida.

If DeSantis runs for president, he will be a formidable political adversary.

The question is, will he run if Trump decides to jump in?

Stay tuned. It could get interesting in 2023 ahead of the 2024 presidential election.